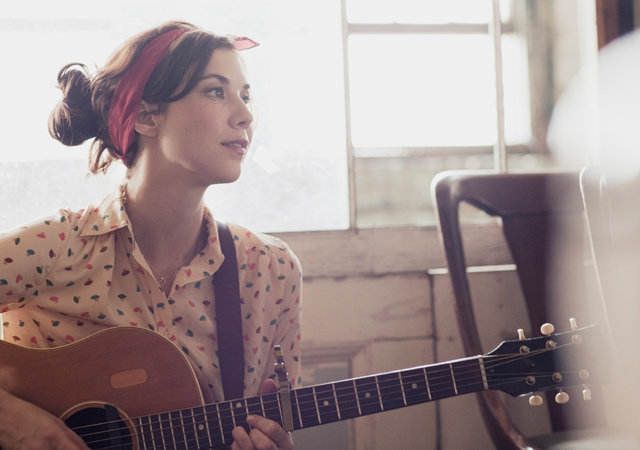 Dublin-based musician Lisa Hannigan has crafted a sophomore album just as strong as her first. Passenger explores themes such as travel, home and the passage of time—and no matter where you listen to the music, this album will make you yearn for the home Hannigan describes.

Following years of collaboration with Damien Rice, Hannigan released her first album, Sea Sew, in 2008. Among other things, the record earned a Mercury Prize nomination and led to an appearance on "The Colbert Report." From the timeless melody of "Safe Travels (Don't Die)" to Hannigan's duet with Ray LaMontagne, Passenger will undoubtedly garner similar recognition.

LAist caught up with Hannigan earlier this month to get the scoop on the new album, her passion for L.A. sushi and her show Tuesday night at the El Rey.

How did the experience of making this album differ from the recording process for Sea Sew?
The first time around, I was somewhat greener, so with this second album, I knew a little more about how things worked. This time I also had a producer, Joe Henry. Joe has this amazing ability to tease performances out of people. Rather than just playing to get it right, we were all playing for Joe—trying to create a performance that would make him feel something. That was wonderful.

On your last album, you told your band that you wanted the music to sound like "rusty custard." What did you tell them for this one? Any food-related instruction this time around?
(laughs) No, not really. We just wanted to create a natural live sound. We pretty much recorded every song in a room together, so that in itself creates a very different atmosphere.

Is the song "What'll I Do" the most likely to cheer up your day when you perform it live?
It's great fun to play. We had a show last night and it's always a foot-tapper.

Did the songwriting process for that one start with the percussion?
Each song is different, but I remember with that particular song, I had the melody and the words. I tried to play and sing it for the lads in the band, and they were trying to play along, but it wasn't quite working. Then eventually, to explain the feeling of it, I just stood up and started dancing around as I was singing and they said, "Ohhhh, I see!"

The beauty of the song "O Sleep" is fully shared between your voice and Ray LaMontagne's. Did you write that song as a duet or did it just evolve as you were putting the album together?
I always wanted to have a duet on the record. I initially wrote "O Sleep" as a solo piece, but as I was arranging I started thinking, "This could be a perfect duet." I wanted a proper one where two people were singing to each other as opposed to just doing harmonies. It evolved over time, and luckily Ray said yes when I asked him if he'd join me.

Do you perform that song on tour?
Yes. This wonderful man in my band called John Smith, who's got an incredible voice, sings Ray's part on tour.

"Safe Travels (Don't Die)" is a mix of love and caution. What was the songwriting process like for that one? Is there a story behind it?
That one came together really quickly. I was walking around town one day and thinking about something a friend of mine always puts at the end of texts: "Safe travels (don't die)." I was just singing that round and round and over and over again as I was shopping.

So I got that chorus that really isn't even a chorus and I took it home and messed around with it on the guitar, and gradually the verses started to come together. I was thinking of a sort of Edward Gorey aesthetic of constant danger around every corner.

It's a nice sentiment that isn't necessarily romantic—it could be paternal, maternal, platonic—just this message of "I really care about you, so please don't get into any scrapes!"

In addition to the themes of travel, home and time, a "bird" pops up throughout the album. Is this bird Passenger's muse?
Well, there are a few birds throughout the album. "Little Bird" off that song is really a metaphor for survival. But in addition to that, my best friend I call each other "Bird," so there are a few times when I'm addressing "Bird" and that's to my best friend. 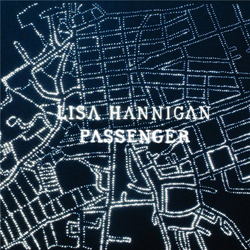 You hand-stitched the album artwork for Sea Sew. Did you create the artwork for Passenger as well?

Yes. I wanted to do something to do with maps, and I wanted to move away from the sewing. So the images are actually maps that I perforated in paper and then put them over a lightbox so my friend could photograph them.

Is it a map of one particular city?
The maps show where I wrote the record. It's a mix of Dublin, New York and a village in West Cork. So the front and back covers are those three places melded into one.

At first I thought it was a photograph from a plane…
A lot of people have told me that, which is great. I like that it's quite stark in comparison with the first record. Cleaner and simpler.

How long did it take you to put together?
The idea percolated in my mind for a while, but it probably only took a month while I was doing other things. It was a happy time, though I did get repetitive strain injury from it. (laughs)

Since a lot of the songs were written on the road, do you consider this a good travel album?
I hope it is. A lot of it was written on the road and one of the main themes is home and the nostalgia that comes along with it when you're traveling. When you're on the road, the idea of home becomes more nostalgic and misty than it is when you're actually there. In addition to being homesick, it also includes a sense of nostalgia for times past. So I suppose both of those lend themselves to travel because there's something so nostalgic about a road trip.

What are some of your favorite CDs that remind you of home when you're on the road?
I definitely listen to music by my friends from Dublin. There's a band called Jape who are amazing, and their music reminds me of nights out at home. Plus Cathy Davey and Villagers and people like that.

I'll also listen to records I had when I was a kid. My car just has a tape machine in it, and I was recently at home looking through the tapes I had as a kid, and I found Bad and Thriller. Since then, I've been listening to them nonstop.

Speaking of older audio formats, will Passenger be released on vinyl?
Eventually, yes. I also hope at some point to release it on cassette tape, because I can't be the only one with a tape machine in my car!

Back when you released your first album, you appeared on the Colbert Report. Are you still feeling the effects of the "Colbert Bump"?
Certainly! And if I play the song we played on his show, people often shout "Colbert!" which is nice. I usually dedicate the song to him as well.

Is it true you sent him a unique note after your appearance?
Yeah, I hand-stitched him a thank-you note.

Was it pretty long? That must have taken some time.
It wasn't too long. Nothing encourages brevity like having to stitch every word!

You're headed to Los Angeles for the first stop on your new tour. What's something you're really looking forward to when you get to L.A.—perhaps a restaurant?
The sushi. Sushi me up for breakfast, lunch and dinner! Everyone in the band is on board with that plan. We don't have very much sushi in Ireland and I just love it. We're all mad for it, so when we're in New York or L.A., we'll have sushi for all three meals. It's shocking.

Would you mind giving us a preview of the El Rey show?
Well, the band has gotten a bit bigger. As I said, John Smith is going to be singing and doing the support at the El Rey show. We'll be playing all of the new songs, which we've been touring with in Ireland throughout the summer.

I really feel like, as a band, we're going deeper and deeper into the songs. It's been an incredible experience to be touring with this record. Oftentimes, songs will lose their luster after time. You write something, and for a little while it's all you want to play, then you don't feel like playing it anymore. But whenever I see these songs on the set list, I get excited.

When you played Largo at the Coronet in 2008, you created quite a stir with some of your instruments. Will the harmonium be making an appearance at the El Rey?
Yes, the harmonium will be front and center once again. There'll be quite a bit of instrument swapping as well. We've got a ukulele, mandolin, a nice five-string banjo, electric guitar…

We're just really looking forward to the show. It takes so much time to make a record and so much love and care has gone into this. Now I just want to throw it in the air and play the songs!

Don't miss Lisa Hannigan at the El Rey on Tuesday night, Sept. 27, at 8 p.m. Her new album was released last week and is currently streaming in its entirety (through Oct. 11) on KCRW's website.