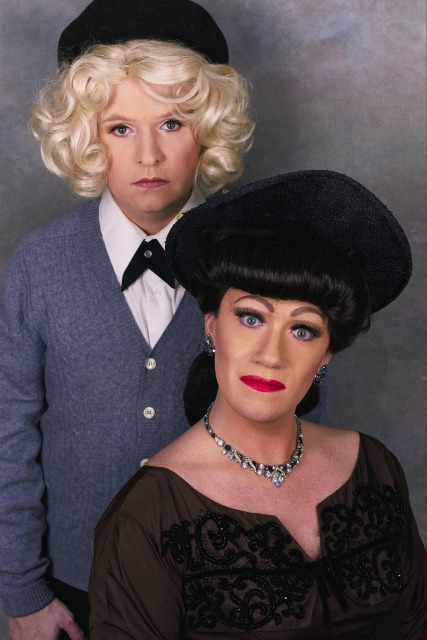 Jamie Morris and Brooks Braselman in 'Mommie Queerest' (photo by Mitch Soileau).
Jamie Morris' hilarious drag homage to Joan Crawford, Mommie Queerest, is back in Los Angeles once last time to round out a nationwide tour of the show.

This reviewer has had the guilty pleasure of seeing this stage adaptation of Mommie Dearest twice before — and just like the film, this play gets better with every viewing. The production is a well-balanced and cohesive spoof that stays close enough to the film's narrative to evoke Faye Dunaway-nostalgia, but shines brightest through Morris' original jokes and content. Mommie Queerest features spot-on impersonations, playful physical comedy, cheeky satire, gender-bending silliness and striking Crawford-worthy costumes.

The cast of Mommie Queerest is lead by Morris through an impressive flurry of costume and scene changes. Morris plays a female impersonating Joan struggling for enduring fame through heavy lipstick, wigs, and rubber enhancements. He uses slurred mispronunciation, high camp, and sharply contorted gazes as a platform to satirize Dunaway's rendering of Crawford's rigid perfectionism. Morris remains precise, animated, and gratifying throughout the production. Brooks Braselman's performance as Christina Crawford is priceless. He is energetic and gutsy with impeccable comedic instincts and timing. Gavyn Michaels and Matt Crabtree complete the cast, adroitly playing tens of characters.

Under the direction of Christopher Kenney Mommie Queerest is fast-paced with highly choreographed slapstick and physical comedy. At times, actors cross the fourth wall or ad lib, which gives the show a hardy, easygoing feel despite all the quick scenes and action that occur on the stage. Although not credited, the costumes worn by Morris as Crawford are stunning.