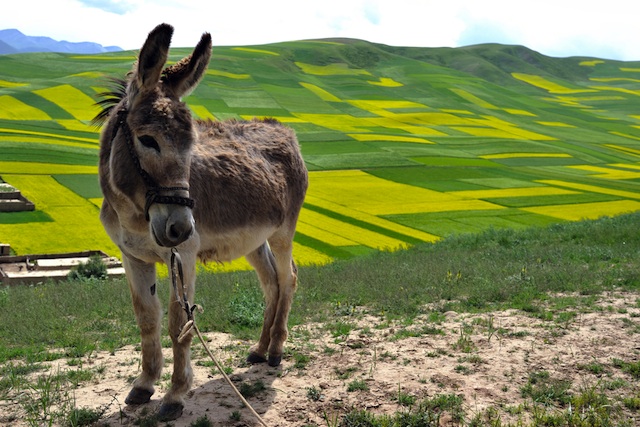 Photo by MOSCHEN via Shutterstock

Once upon a time, donkeys were beasts of burden that carried sugar cane, coffee and other crops on Hawaii's Big Island. Then Jeeps leftover from World World II put the beasts out to pasture, and the wild, braying donkeys were dubbed "Kona Nightingales."

This was fine until the tourism industry on the island overtook agriculture, and the creatures were seen as a nuisance. They broke fences, ate the landscape and ran into the roads, where they were hit by cars.

That's where Mark and Amy Meyers stepped in. The couple started taking in abandoned or abused donkeys, until their stalls started filling up. That's when they started up a nonprofit rescue group Peaceful Valley Donkey Rescue that works on finding homes for unwanted donkeys, according to a profile of the nonprofit's work in the Los Angeles Times.

Yesterday, the Meyers airlifted 120 donkeys from Hawaii to the mountains of Tehachapi and Times reporter Catherine Saillant was there when the Meyers escorted the donkeys to their new home:


Mark Meyers hasn't slept for more than a day and his back is killing him, but he still has to wrangle a donkey who refuses to exit its horse trailer after a 2,500-mile flight from Kona, Hawaii. Dozens more wait behind it.

So Meyers pops an 800-milligram ibuprofen and gets down to work. First he starts pushing, but then he tries sweet-talking the beast. "Come on, girl!" he says. "Come and see your new home!"

Finally the jenny clambers down. She lifts her gray head and begins braying loudly. Immediately, hundreds of other donkeys join in, creating a discordant chorus that breaks the morning stillness in this scrubby mountain valley.