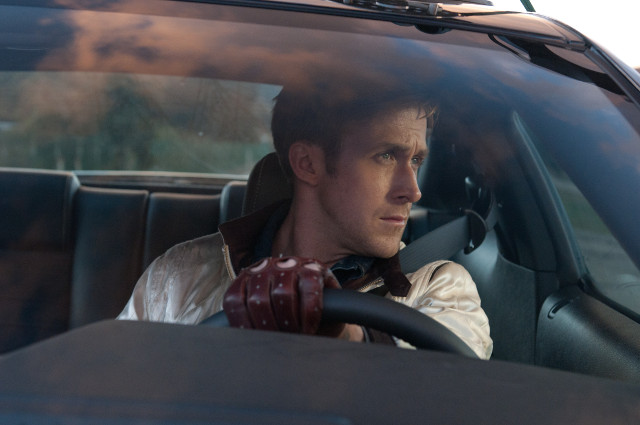 Labor Day's come & gone, LAUSD is back in school, but in every theater playing Drive, summer's still in high gear. The Ryan Gosling vehicle is classic L.A. noir: everybody's got something to hide & nobody's pulling any punches. Gosling plays "Driver", a shadowy stunt man turned wheel man turned marked man. Shot with a brutal budget of $13M, the film cuts to the bone & cuts to the chase.

Nicolas Winding Refn, Drive's Danish director, isn't a household name yet (to be honest, we don't even know how to pronounce it). He's built a following with films like Bronson & Valhalla Rising that are as meditative as they are brutal. This may be his breakout film on these shores - it's certainly the first time one of his works has appeared on billboards, instead of internet message boards. Supporting cast is none too shabby either, including Oscar nominees Carey Mulligan (An Education) & Albert Brooks (Defending Your Life), Golden Globe nominee Bryan Cranston (Breaking Bad) & winner Ron Perlman (Hellboy) & Emmy nominee Christina Hendricks (Mad Men).

Want to hear a weird transition? The Lion King is old enough to watch Drive without a parent or guardian. Nineties nostalgics will rejoice in the return of the king, but skeptics may wonder: does it have to be in 3D? The film was never designed for the format; at the time, it was limited to some IMAX nature films & theme park attractions like Disney's own Honey, I Shrunk The Audience. It feels like colorizing a black & white film.

On the other hand, The Lion King's been monkeyed with before, having been re-released in IMAX back in the aughts. There's little doubt that the terrifying stampede sequence will explode off the screen, as will the sweeping vistas, lush jungles & gnarly boneyards. Hakuna matata.

Seeking a cinematic safari? Check out our weekly guide to the best of LA's repertory theaters, exclusive screenings & midnight movies. This week we have special coverage of Quebec in Hollywood & a lovely pairing of another revival & new release.