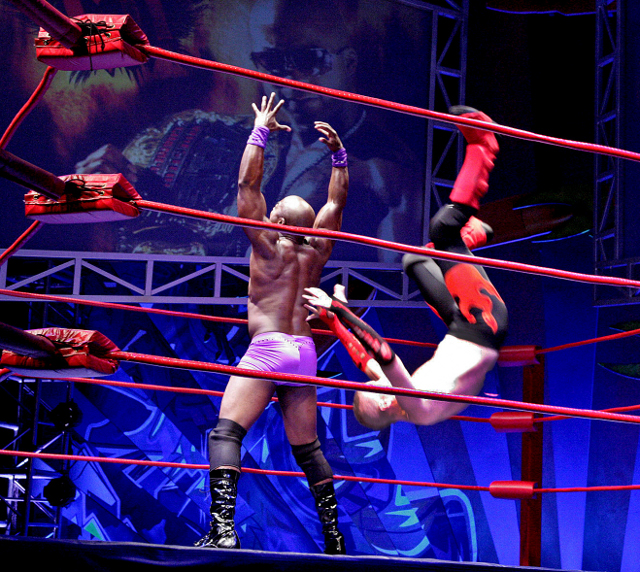 Shuffling down the Geffen Playhouse aisles to find your seats for "The Elaborate Entrance of Chad Deity," the first indication that this won't be a typical night of theatre is the music of Notorious B.I.G. and M.I.A. playing while the audience waits for the performance to begin. The second clue: a large wrestling ring takes up most of the stage.

Mace (Desmin Borges), the plays narrator, has dreamed of being a professional wrestler since he was a child sitting in front of the TV on Saturday mornings, watching his favorite wrestlers while munching on generic corn flakes covered in sugar. Despite his enthusiasm and dedication, he’s resigned to the fact that he’ll never be a marquee star like Champ Chad Deity (Terence Archie). After discovering the charismatic Indian-American Vigneshwar Paduar (Usman Ally) talking smack on the basketball courts, he convinces Everett K. Olson (Steve Valentine) to give them a chance for success.

Absent is a female love interest for any of the characters. Instead, love of wrestling, money, and fame fuel the characters and provide ample opportunity for conflict. As Mace and VP strive to tell a good story on stage, they are faced with the realities of trying to fit into a system driven by greed and stereotypes. Sometimes subtly, frequently not so subtly, the play successfully explores the role of people of color in a system where power and wealth are concentrated - whether it’s wrestling or American society.

While the subject matter may sound a bit heavy, the strong cast and smart script keeps the play moving and the audience laughing. “Chad Deity” is the most fun I’ve had at the theatre in a long time, and it felt like the actors were having almost as much fun as the audience.

Between the brightly costumed wrestlers making their elaborate entrances down the aisles, the effective use of slick videos, the periodic powerbomb or clothesline, and the occasional audience interaction, even the most worn-out audience member rushing from work on a Wednesday night will feel enlivened by the electric energy in the theatre. The Geffen has once again staged a world-class production of a fun - and important - play.