Hamilton Leithauser of The Walkmen on Their New Album, Playing L.A., and the 11 Worst Records in Circulation 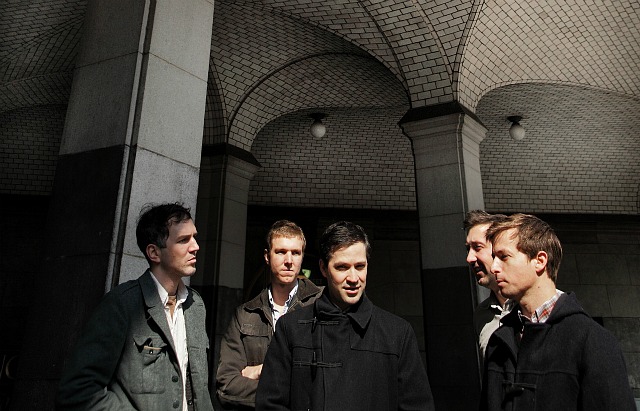 The Walkmen (Photo by Billy Pavone/Used with permission)

Nearly a decade ago, The Walkmen burst onto what was then a nascent indie-rock scene, sporting a wistful, moody and beautiful blend of piano, guitar, drums and bass. Their debut, Everyone Who Pretended to Like Me is Gone, was nearly universally lauded while their four albums since have each proved inventive and a study in creative composition that has the potential for widespread appeal. Now, showing off new material and still showcasing one of last year's best album's, Lisbon, The Walkmen have hit the road.

As the band preps for a Sept. 14 date with the Fleet Foxes at the Greek Theatre, we managed to steal some time from lead singer Hamilton Leithauser, who revealed his influences, what we can look forward to on the new album and some of the worst records he's ever heard (and bought).

LAist: I want to start by asking about reviews and how they affect your artistic approach. The reviews for Everyone Who Pretended to Like Me is Gone were nearly universally positive with some even hailing it as a new era of music. Did that affect how you guys approached the next album, Bows + Arrows?

Hamilton Leithauser: When we started our band, we were in a place where we’d been in other bands since we were kids and when you’re really young you’re just sure you’re going to be the next Rolling Stones and take over the world. We had seen these bands that we’d really cared about that we’re no longer [together] for artistic or personal reasons. So, when we started out doing our first record, I think we were a lot more cautious about making our first record then we had been in the past. We really wanted to make the record before we started touring as a band because we wanted something for our fans to hold on to. When people started responding positively to that, it was a little bit of a boost and we thought it was something we should pursue as more of a full-time gig.

You worked in a museum before joining the band full-time, correct?

I worked at the Met, yeah.

What were the other guys doing?

A couple of them had gone back to college; they had left earlier. Matt [Barrick, drummer] was working at the museum doing sets, I remember. Paul [Maroon, guitarist] was working as a temp...I think he went back to college. Then we started doing this full time when Bows + Arrows came out.

Listening to Everyone Who...., and then going all the way up to Lisbon, I can hear this big jump you guys made. From my perspective, it seemed you guys were coalescing around each other like never before, that your approach seems to be working in perfect harmony. Do you think with Lisbon and with the new record coming out soon, that you’ve hit your stride as a band or have achieved your maximum potential or is there still more room?

The thing that I’m most excited about with this brand new one is the way we’ve gotten to all play together. Honestly, I think that...we don’t always get everyone on board. There’s always somebody excluded; it wasn’t always about getting everyone on board all the time. But honestly, we just did these first couple of days with this guy Phil Ek who we’re going to record our record with. What we’ve been able to do is get everyone in a room and play songs, which sounds like a nothing, but to us is kind of a big step.

We have a lot of stuff written, amazingly. I don’t know where it came from cause I feel like we’d been banging our heads for a long time. All I can say is, I feel like we do have a lot of rock songs but the overall feeling to me is that there’s an overall relaxed approach. We had some really, really fast stuff on the last one [Editor’s note: see, Angela Surf City]. I feel like the songwriting and the pacing has a slightly more relaxed approach, which I think has really served us well.

So, picking up right where Lisbon left off?

To me, it’s a different direction. You always like to hope that you’re doing something very different. I mean, I really am happy with You and Me and Lisbon; I really like both those records. But, I do think that when we put this one out, I gotta feel like we’re doing something that feels very new to us. We’re also working with someone who has a new perspective. We really like him and it seems like he knows what he’s doing, I mean, that last Fleet Foxes record, the sound was just fantastic. We’re going to give him, from the get-go, more control then we ever have given to anyone.

I think you guys have worked with a different producer on each album. Is that correct?

Lisbon was the only time we’ve ever actually worked with a producer. The word 'producer,' I don’t know, I picture some guy in sunglasses, making calls, calling the shots somewhere in an office in L.A. I don’t know what it means. But I do know that on some of my favorite records over the years, the Rolling Stones had a fantastic producer, The Beatles had a great producer and Bob Dylan used to produce things.

Well, now that you’re working with Phil Ek, what do you think it means?

I still don’t know. All I know is, we have a different person in the room from the get-go and it seems like he’s gonna have creative ideas beyond just moving a snare mic back or something like that.

Did the portion of the tour with Fleet Foxes come from working with Phil?

No, that came first, actually. It was just a coincidence, but it was a happy one, I mean, they asked us to do that a long time ago and then I heard the record and I thought, man that sounds really good. We were just starting to talk about people we wanted to work with and Phil called us. It was like the day after I first heard that [record].

Did having Phil on board change your approach at all?

No, I mean, the way we write songs now is basically me and Paul and Walt [Martin, bass/keyboaordist] get together and try to hammer out all the points that we like, the sound and everything. Then we take it into the [studio] and get everybody together and if the band sounds good, then it's time for us to pursue it in the studio.

Well, I'm curious about that approach. Your songs, your lyrics, many seem to be heavily influenced by travel or by some physical location. How imperative is travel to your songwriting, if at all?

Yeah, I assume it is, but we've travel so much in the past ten years, I feel like I'm never home. I wouldn't really be able to give an objective opinion, honestly. I mean, we write about what we have, what we know.

Is there a place, maybe besides Spain, that's helped you in another way other places haven't?

The only place I've ever been able to get anything done, I don't know why, is in New York. Maybe it's because it's where I live, but then again, I do travel a lot. That's just been the case for ten years for me.

What are you listening to these days?

Right now, I'm going through a pile of probably the worst records I've ever bought in my life. I'm listening to each one before I throw them away. I bought 11 records and I think they are the 11 worst records in circulation.

Can you tell us what they are?

Lenny Bruce - The Story of Lenny - What I Was Arrested For ; Jorge Ben, Brazilian guy and the album is called Ben Jorge. Absolutely awful.; I've got Gil Scott Heron, the album called Reflections. It's absolutely horrible.

You might be able to unload that Gil Scott Heron now.

No, no, this wasn't his finest work.

Well, if we can go down the opposite route, what are some of the things you guys have listened to, past or present, that have been pretty influential?

Recently...I like that Fleet Foxes record, I really do. I thought it was great. Thee Oh Sees, from San Francisco, this album called Sucks Blood. I like that Deerhunter record that came out.

I hear a pretty strong blues/rock element to your music. Did musicians like John Lee Hooker or Muddy Waters influence you guys?

Yeah. I mean, I wish we could play with a little bit more swagger, but we can't. We're the wrong guys for that job. If you listen to white guys who play the blues really well, like the Stones, those are dudes who can get a shuffle beat. We can't do that. We tried, but it's terrible.

Well, we only have a couple minutes left, so let me you ask you about L.A. and the West Coast. What are your impressions/thoughts?

We used to go there so much, but it's been a while. I guess we've going to Europe a lot. I think we may have been out there one time on this record, so I am looking forward to going back. We always have a good time; we have a lot of friends in L.A.

You guys are playing the Greek Theatre on your return. Ever played there?

No, we haven't I've driven past it but never played. It looks very cool.

Alright, well, we look forward to seeing you back in L.A. Thanks so much for your time.

Thanks. Take it easy.

The Walkmen play with the Fleet Foxes Sept. 14 at the Greek. Get your tickets here.