The Teddybears Are Coming to L.A. to Get a Piece of the Nature Pie and Turn Us Into 'Bearheads' 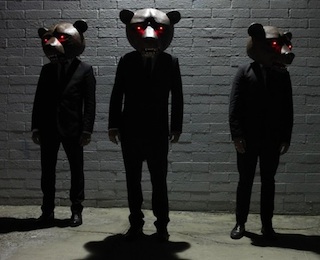 The Teddybears
A few seconds into "Cobrastyle" and you'll probably start nodding in recognition. The Teddybears' song is one of many of the Swedish band's that have found a home and a global audience thanks to use in video games, television shows, and major U.S. movies. The band, which has been together for nearly two decades now, will be playing the Echoplex on September 15th as part of Check Yo Ponytail 2.

It's hard to imagine a band who plays their combo reggae-punk-electronic-pop music live wearing giant teddy bear heads to be anything but quirky when you talk to them about an upcoming gig. We had the chance to check in with The Teddybears' Patrik Arve via email about playing Los Angeles, the genesis of the band's remarkable musical collaborations, and what music they like to listen to lately.

LAist: What does playing in Los Angeles music scene mean to you?
Patrik Arve: It means doing what has to be done. The mission is to use musical warfare on the californian population and turn them into "bearheads."

How did the use of your songs in US-based movies, TV shows, and commercials begin and do you think that has impacted the acceptance of the Teddybears stateside?
I guess the right people in the right places has good taste in music. Being in several films and so on, of course that have made a difference when it comes to [listeners'] knowledge of the band.

You seem to work with a lot of amazing and diverse artists, especially on the recent album. How did the collaborations come about?
Love, admiration, telephone calls/e-mails, aeroplanes, studios, food, drinks and a happy end.

If you had some free time to kill in LA, what are your favorite places to visit/drink/eat?
In my desperate search for fresh air and a piece of the nature pie, I tend to end up in the mountains while in L.A. [My] last time in LA, me and my fellow Teddybears were climbing the hills all the way up to the Griffith Park Observatory. Need to mention the brilliant veggie breakfast at the Trails cafe in the same Griffith Park, too.

What are you listening to on the tour bus?
I can't speak for the other bears but if I'm in control of the sound system you will probably hear loads of reggae from the 50's to now, and maybe I might throw in some false true Norwegian black metal to spice up the ride.