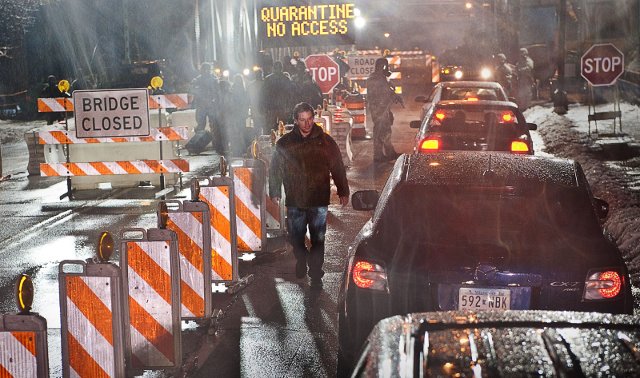 The past few weeks have brought earthquakes, massive power failure, continued economic desperation... the only thing missing is a global pandemic. Warner Bros. offers a shot of that with Contagion. The adult (but at PG-13, not too adult) thriller leaves the sanitizer & brings the star power - Matt Damon, Gwyneth Paltrow, Jude Law, Kate Winslet, Laurence Fishburne, Marion Cotillard & Bryan Cranston, to name a few.

Contagion director Steven Soderbergh is adept at ensemble, as evidenced in Traffic & the Ocean's Eleven franchise. Screenwriter Scott Z. Burns has worked with both him & Damon before, having written The Informant & The Bourne Ultimatum. His background in socially conscious filmmaking (his first feature was the HBO uranium-theft drama Pu-239) suggests something with more depth than Outbreak, but much less escapism too (particularly on what's already going to be a depressing weekend). We dare you to watch it in IMAX without immediately washing your hands afterwards.

The myriad of comic book heroes over the past decade has inspired a counter-genre of "Joe six-pack superheroes", which portray costumed crusaders as cynical (Kick Ass), delusional (Special) or both (Super). One Fall offers a new spin on this archetype by returning it to heroic heights. James is a true miracle man - he's survived what should have been a fatal fall, and upon waking discovers he can heal any other injury too. He first uses his powers for financial opportunism, only to experience a crisis of faith that - wait for it - inspires him to better his community and himself. Welcome back, optimism. We've missed you.