Explosions in the Sky's Munaf Rayani on Hollywood Forever, Pukkelpop and Umami Burger 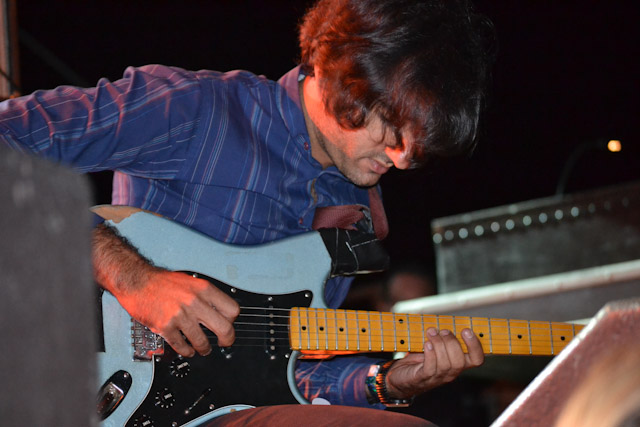 We caught up with Explosions in the Sky guitarist Munaf Rayani before the band took the stage at FYF Fest last weekend and got the lowdown on surviving the deadly storm at Pukkelpop Music Fest in Belgium, how an art installation at Hollywood Forever Cemetery to debut the band's latest album, "Take Care, Take Care, Take Care," came to pass last April, and why they love Umami Burger.

LAist: What did you guys think of the art installation at the cemetery? How did that come about?

Munaf Rayani: We only saw it through pictures and video but we heard it was a smash hit.... It was kind of a collective idea between us and some people that we'd worked with. We got in cahoots with the cemetery and they were cool with running it the week prior. A few creative minds, a few phone calls and it went through! What'd you think of it?

LAist: I thought it was a great concept to have this walking tour of unique physical installations as a way to present the album as a first listen.

MR: That's why I was most pleased that it was a true individual interpretation of these artists and the way we found them — a few we knew their names, others we looked at their work and were curious as to what they'd make of the six pieces. So it was exciting for us to see what these artists see in the songs. And if we picked six different artists it would have been completely different too and that's the beauty of music and the visual interpretations thereof — to each his own. And it was exciting for us to experience what others "see" or "think" when they hear our songs.

MR: We just did a string of festivals in Europe and... a more troubling story — we were at Pukkelpop [music festival in Belgium, where five people died after a stage collapsed] and the storm came through and just kind of blew the whole festival away and shut it down. That was really strange and surreal because we had just finished our set and the storm came through about ten minutes later. When we went on stage, the sun was shining, we played a 45-50 minute set and it darkened up. We loaded pretty quickly into the trailer, locked the doors, and the rain started. We went underneath a tent and boy, it just blew everything away. The timing for us was crazy — how did we just miss that? But the collective experience of what other people went through was devastating, just disastrous. So, that happened.

But on the flipside we played the David Letterman show and that was very exciting. We felt very lucky that whoever was choosing the music there and whoever was pushing us made it work out. because there's only two talk shows that we really wanted to ever be on and Letterman was #1 and Conan was #2. On our last record we got to play Conan when he was in New York.

Explosions in the Sky perform "Postcard from 1952" on Letterman:

LAist: Did you have any directive to keep it under four-and-a-half minutes or anything?

MR: That was exactly it we had to edit a song to three-and-a-half minutes but to tell you the truth, Biff, the stage manager who's in a lot of the bits and all the crew guys said that in the 20-30 years that they'd been working for CBS of this program they had never seen an instrumental rock band on the show. So it felt really good that, man, we made some sort of impression on someone to allow us that venue.

LAist: You guys are based in Austin. Do you have any crazy LA stories? 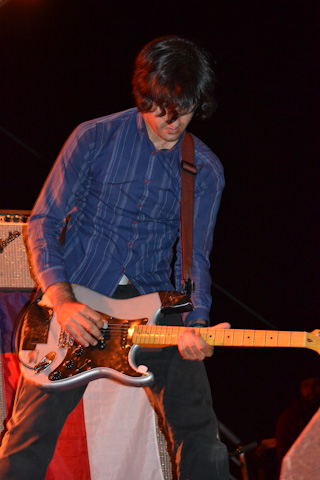 MR: We just discovered the Umami Burger a couple trips ago and that's really tasty so we try to make our way there. LA's a cool place for us to come visit. Growing up in Texas, anything outside of Texas was almost make believe so even when we went to New York for the first time it felt really good. We've celebrity sighted a few people — saw Tim Allen get some coffee one morning that was pretty funny. The crowds in L.A. have been so good to us that it's one of those checkpoints on the tour that we have a good feeling the shows going to go really well. The cemetery, Palladium, and even starting at the Knitting Factory and working our way up.

LAist: How would you feel about doing the Hollywood Bowl with the Philharmonic?

MR: We used to want to play it but not anymore. We've heard enough about it that we kinda lost our interest. But I know it's a beautiful place but if the opportunity came up it's something we'd consider.

LAist: Have you considered collaborating with an orchestra?

MR: We've batted around the idea of making an orchestral composition of the album — without us. Just a symphony playing it. It's something we've talked about for a while but the execution is tough to pull off. We're talking to a great orchestral transcriber right now out of San Francisco and if we all stay on course than it might be something that could happen in a few months or a year.

Metallica did it already where the band played with the symphony... this band we love — Mono, out of Japan, played with a symphony a couple times. If we could do it we'd like to do it a little bit differently. We'll see what happens.