Somewhere Between Low Humor and High Morality: 'Guided Consideration of a Lamentable Deed' 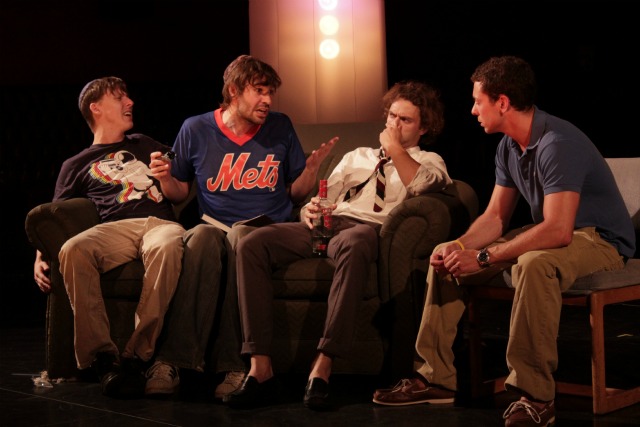 Falling somewhere between the low humor of Fast Times at Ridgemont High and the high morality of Charles Dickens, Frank Basloe's Guided Consideration of a Lamentable Deed follows an otherworldly guide through an ethical and redemptive journey on the eve of a college graduation. Under the sweeping direction of Dylan Southard, this Need Theater production invokes a discourse of social philosophy punched with giggly pot jokes to shed light on a sexual indiscretion. Guided Consideration of a Lamentable Deed is a stylish and didactic new work, that remains funny and unpretentious through capable performers.

Guided Consideration of a Lamentable Deed features a well-chosen cast that that accentuates individual comedic and dramatic abilities. Ben Kurland leads the cast as Tim, a conflicted anti-hero that manages likability despite his unsavory actions. Kurland smartly and skillfully plays an atypical and irresolute leading man with uncertain and cautionary energy that realistically suits the role. Isabella Ortega and Ian Forester give outstanding dramatic performances. Ortega floods the role or Marianne with tenacity, bitterness, and emotive depth. Forester brings balance, grit, and rationalizing brawn to the work. Edward Kiniry-Ostro and Terence Leclere are a hilarious and memorable comedic duo as Ariel and Eytan.
.
Southard's direction is fluid and smooth with broad use of the stage. Process, passage, and change are symbolically integrated into his staging through deliberate use of partial darkness and vignettes. Guided Consideration of a Lamentable Deed is beautifully integrated into a non-traditional theatre space with striking set features. Keeping with the play's theme, beer and post-show music come with the price of admission.