It's Getting Fake in the Whole Foods Parking Lot: Is the Silver Lake Location a Hoax? [UPDATED] 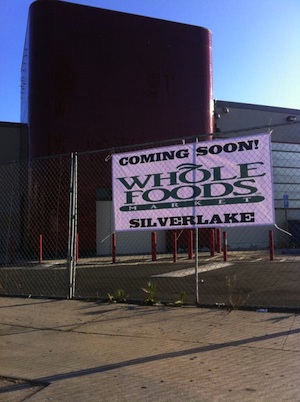 Photo by @atwatervillage via Twitpic
On Monday evening, it was hard to discern what was funnier: The angry readers who thought we were pot-kettle-black hipsters for cracking wise about hipsters in Silver Lake saving their imaginary paychecks to shop at a Whole Foods market, or the gleeful readers excited to spend their paychecks on fancy cheese and organic produce at the just-revealed location in the vacated Circuit City on Sunset Blvd.

Around that time came the first inkling that the whole thing might be a hoax. Yes, a hoax.

It's an odd thing to joke about, isn't it?

KCET Food's Tumblr suggests they've deemed it a hoax, and they think they know who is behind it (possibly Nick Thune, whose exuberant Tweeted photo next to the Whole Foods banner on the fence is the Tweet heard 'round the Eastside in this case). The Eastsider LA cautions we ought not get our hopes up, either.

Meanwhile, we tried to get a hold of someone at Whole Foods' corporate offices yesterday afternoon, and still haven't heard back. We'll let you know as soon as we hear from the horse's mouth.

In any case, hipsters, you should still save your paychecks. Those skinny jeans aren't going to buy themselves.

UPDATE 10:35 AM: Whole Foods corporate has confirmed it is, indeed, a hoax. Here's their email to us:

Thanks for reaching out to clarify this rumor. Whole Foods Market has plans to open several stores over the next few years in the Southern Pacific Region, but none in L.A.'s Silver Lake neighborhood as of right now. The stores we have set to open are:

New stores are announced four times per year on our quarterly earnings calls. Upcoming calls and transcripts of those calls can be found at: http://www.wholefoodsmarket.com/investor/index.html).

UPDATE 2:21 PM: Nick Thune says it wasn't him: "I didn't post the #Wholefoods signs in Silverlake. Happened to drive by it and grab a picture thinking it was funny. @LAist"