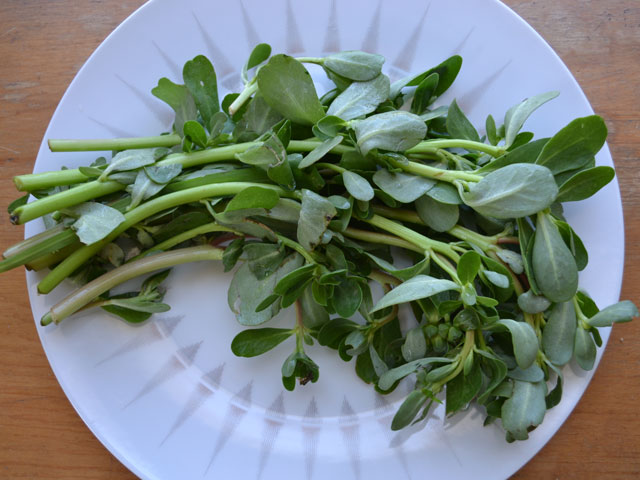 After recently reading about all the superhero qualities of purslane, I knew I'd want to profile it and encourage everyone to eat this succulent annual that comes around every summer. Purslane is a leafy vegetable mostly sold in farmers' markets, though it is often considered a weed when found in gardens, due to its hardy qualities—but it's a beneficial weed, since it helps out neighboring plants. It's a great food to forage, since it's easily identifiable and rather prolific in the Southern California landscape.

Purslane has a crunchy bite due to succulent leaves and stems, and a bit of a sour, salty taste. The stems, leaves and flour buds are all edible. Use it raw in a salad, stir fry or steam as you might with spinach, or float it in a soup. Purslane goes well with other tangy flavors like vinegar and lemon juice, or cheeses such as parmesan, ricotta salata or feta. If you do choose to forage, this article will help you in your travels. I even found some growing in my driveway and gathered the seeds. Somewhat obvious aside: don't eat or propagate purslane found in the street, since it could contain a high percentage of heavy metals.

So, why am I trying to convince you to eat a weed? For one thing, purslane contains more omega-3 fatty acids thank any other leafy vegetable, right up there with fish, algae and flax seeds. For another, purslane is a great source of Vitamin A, Vitamin C, some of the B vitamins and carotenoids as well as Magnesium, Calcium, Potassium and Iron. And for yet another, there are two types of anti-oxidants present that have antimutagenic properties. From a gardening standpoint, purslane can be a nice ground cover in dry soil, since the roots pull deep water closer to the surface, making it available for neighboring plants. Something to note, if you are a candidate for kidney stones, purslane also contains oxalate, which may make it problematic for you, but otherwise, work some of this superfood into your diet!

The sad thing is, there aren't many recipes for purslane out there, but i'll share what I found. If you're using it raw and want to try it out in a salad, this tomato, cucumber and purslane salad just makes use of the leaves, or cool off with cucumber-purslane-yogurt salad. If you're ready to make it the main green, try out this fruity purslane, peach and onion salad. If you want to get fancy, this purslane, meyer lemon and pear salad with kaffir lime vinaigrette sounds divine!

Some of the more creative uses included this purslane agnolotti where purslane is part of the pasta stuffing. There are also a few references to using the seeds as a seasoning or in seed cakes, and I think this caraway seed loaf cake would be a fine basis for substituting purslane seeds. If you're looking to preserve purslane for the winter months, this easy pickled purslane requires no cooking, as does this preparation for fermented purslane, similar to saurkraut.

I thought it might be nice to try something like a crunchy rémoulade, so I used this recipe for rémoulade sauce. Many rémoulades call for minced anchovies, so you can mince and add if you like. I chose to use mine as a garnish. 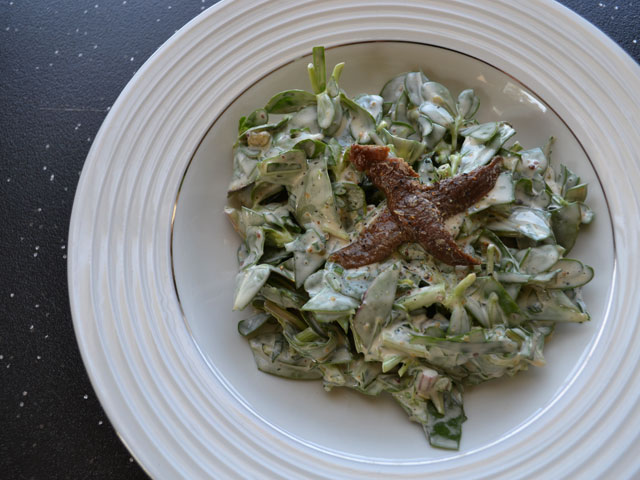 1/2 recipe of rémoulade sauce from epicurious.com

Prepare the rémoulade sauce as directed in a large mixing bowl. Chop purslane and place in the mixing bowl and toss to coat. Serve in a bowl garnished with 2 anchovies.