Sunset Junction is OFF, Permit Denied 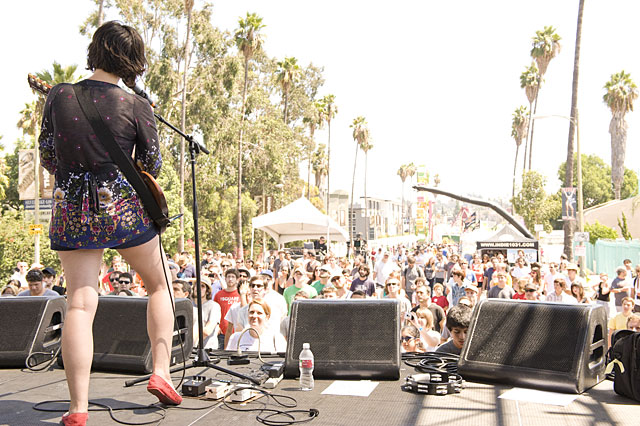 The Happy Hollows at Sunset Junction 2008 (Photo by Koga/LAist)

After a morning of testimony from the public, the Los Angeles Board of Public Works has voted to uphold their decision to deny the organizers of the Sunset Junction Festival their permit for this weekend's event.

The permit was denied earlier this week when organizers were reminded they had not paid up on the bill from the 2010 event, which covered city services like police and clean-up. That bill was for about $250,000, and it is an amount that was contested by organizers, however, as one Board member pointed out today, even if the contested fees were removed, there remained at least $65,000 owed, and not a single "good faith" payment has been made.

Sunset Junction representatives went before the Board today to explain that they sort of had the money that was required to secure the permits, only they did not have a check in hand to give to the city today. Despite pleading for a new "hard deadline" on Thursday—two days before the August 27 start of the two-day music festival and street fair—the Board was not willing to accommodate.

The Board took turns speaking once public comment closed, and each speaker was supportive of the concept of community events, music festivals, and non-profit fundraising, but not in the least supportive of the efforts of event founder Michael McKinley and his behavior over the past few months.

Board member Jerilyn López Mendoza was the first to address McKinley and the room, and she expressed concerns echoed by members of the Silver Lake community who were afraid the organizers would do little to improve upon the safety, noise, and access to the festival for locals, who in recent years became incensed at being required to pay admission to cross the street to get to their own homes.

John Choi spoke second, and he essentially called shenanigans on McKinley's claims he couldn't access the local council to get information, noting that Council President Eric Garcetti, in whose district the fest takes place, is one of the most accessible officials on the City Council, and that in the past 10 months it seems unlikely McKinley did everything he could to ensure the festival was going to be up and running.

The issue of the 2011 fees remained dominant, however, as Choi and the other Board members were concerned about how the Festival could be allowed to operate when they had not paid last year's bill, and were basically asking cash-strapped L.A. to subsidize this weekend's costly event.

The festival's onetime lone supporter on the Board, Valerie Lynn Shaw, spoke with that disappointing tone you may have heard from your teacher...or worse, the principal. Shaw said she'd given the Sunset Junction people the chance to make good, and they didn't do so, and so she changed her vote to authorize the permit to a no. Shaw also pointed out that it struck her that McKinley had "done a poor job in managing the funds for the event," and that his actions would have unfortunate consequences, particularly if not holding the event this year meant the group would go bankrupt, thereby ending the non-profit work of the event, as well.

"This organization has failed the city time and time again," came the final summation from the Board, then a motion to deny the permit, which was easily seconded.

"Seriously, we tried our best on raising the huge amount of money- thanks for all the support.. unfortunately we didn't meet the expectations," said the fest via Twitter shortly after the meeting.

And thus, Sunset Junction 2011 has come to its likely end.