Park[ing] Day L.A. Gets in Gear for September 16th 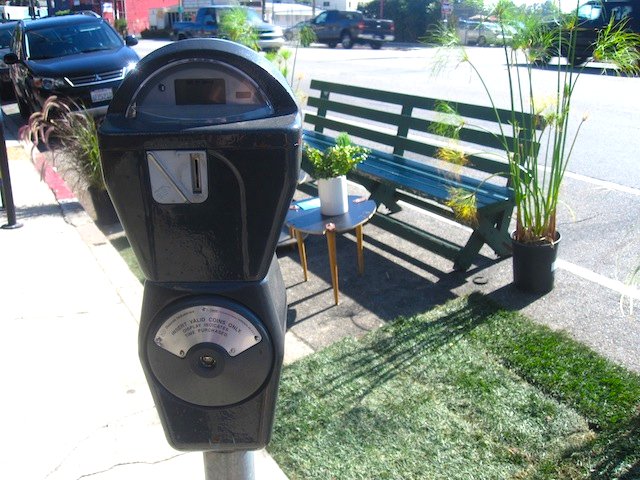 A spot in Silver Lake set up during Park[ing] Day L.A. 2010 (Lindsay William-Ross/LAist)

"Streets are for people!" is the rally and battle cry of Park[ing] Day L.A., which is set to take place for the fifth year on Friday, September 16th. That's the day when "Park-itects" around Los Angeles will turn metered curbside parking spaces into mini-urban parks.

The goal of Park[ing] Day, which began in San Francisco in 2005, is to show urban-dwelling Americans that we could use a little more green space in the midst of our concrete jungles. The spaces transform into eclectic multi-purpose patches of land where visitors can find entertainment, information, relaxation, and community.

Lounge chairs, kiddie pools, ponds, food, music, conversation, plants, games...the spaces are as varied as our city's culture and an opportunity to get to know the people who live and work—and park—where you do, outside of our cars and busy lives.

The parks are still being planned for 2011, but we can expect a motif of "Edible Streets" illustrating the tension between urban gardeners and local government over land use for growing food and flowers. This year, Park[ing] Day will lead into another major local community event, ArtCyle, which takes place the next day on September 17th. Many of the "park-ticipants" will re-build their Park[ing] Day spaces on Santa Monica Boulevard in East Hollywood.