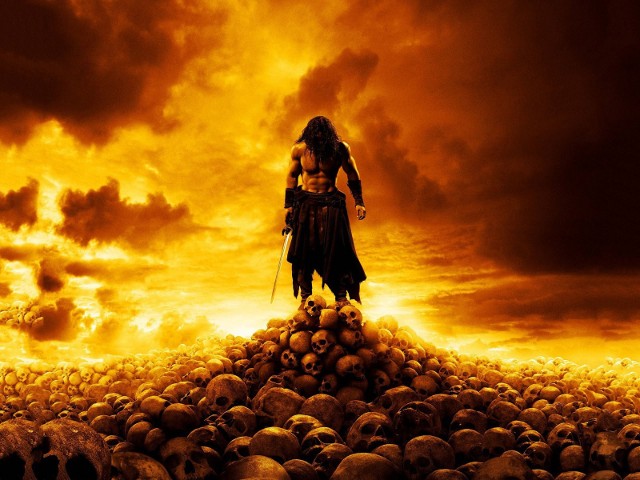 It's a remake rumble this weekend, as two R-rated redos go toe to toe. Lionsgate comes out swinging with Conan the Barbarian, while Dreamworks & Disney don't want you to sleep on Fright Night.

Hawaiian hunk Jason Moma (Game of Thrones) steps into Schwarzenegger's shoes for Conan the Barbarian. Could a run for governor be next? The film hews more closely to the comics than the 1982 film, and early clips are gory as hell (link NSFW, unless you work in a slaughterhouse). Conan's quest takes him against Stephen Lang (Avatar, White Irish Drinkers) & Rose McGowan, with Rachel Nichols (G.I. Joe) & Hellboy in his corner. Director Marcus Nispel's no stranger to swords & slashers either, having birthed viking warrior epic Pathfinder & remakes of Friday the 13th & Texas Chainsaw Massacre.

The original Fright Night is steeped in the 80s, from its lead's obsession with TV horror hosts (the title comes from an old KHJ TV program) to his girlfriend (Marcy from Married with Children)'s popped collar. For those unfamiliar with the story, Anton Yelchin (Star Trek) plays Charley Brewster, a lad who traces mysterious disappearances in his school back to his new neighbor (Colin Farrell), who he believes is a vampire. Unfortunately, nobody else does. Christopher "McLovin" Mintz-Plasse evokes Evil Ed, Charley's nerdy friend, with David "Doctor Who" Tennant as a washed up "vampire killer" turned unlikely ally.

The new Fright Night looks much more straight, but has potential to surprise. Two more names that made us take notice? Toni Collette as Charley's mom & Craig Gillespie (director of the charming Lars & The Real Girl) behind the camera.

Born and Bred knocks out Hollywood spit & polish for an intimate look at young Latino boxers. The documentary focuses on local twins Oscar & Javier Molina as they graduate from teen to adult divisions, and prodigy Victor Pasillas, who at the age of 11 has a 70-match streak. Filmed over 4 years, Born and Bred quickly reveals how ingrained the sport is in East LA & Latino youth culture. Snippets with other young boxers reveal boasts of training as early as 3, with the film's lone girl proudly proclaiming she'll keep boxing until she has babies, then she'll raise them to box too. 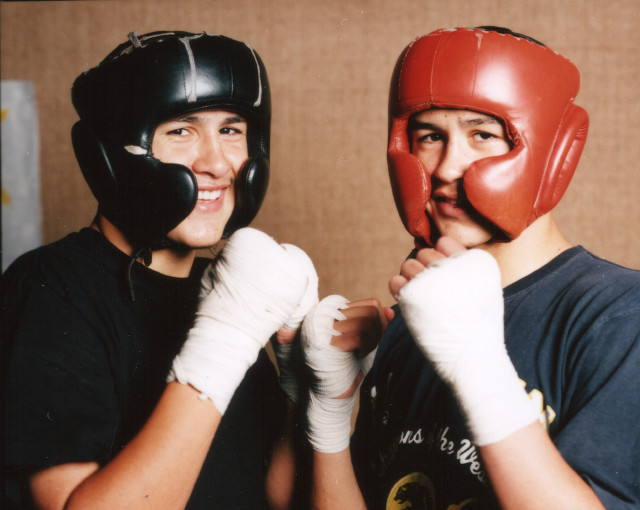 Is their discipline due to religious devotion? All the Molinas are shown to be faithful Catholics, their trophies arranged to herald the crucifix on their mantle. Pasillas' trainer wields a ridiculously large bible in his interviews, and opposing ring decoration includes bits of scripture & banners for "the Jesus Jabbers". Or is it an embodiment of their community's struggle to get by? The twins' mother recounts a harrowing story of hiding in a car engine as she crossed the border. Meanwhile, their trainer (a character in his own right) reveals dozens of jobs & stints on the streets as he attempts to find his own way after serving as an Army Ranger but failing as a boxer.

Wherever it comes from, one thing is clear: these teens have talent in the ring. While there's a touch too much amateur fight footage for those who aren't fans of the sport, it's made up for by the fly-on-the-ring-post look at a revolution in our own backyard. Born and Bred hits early, hits hard & like its protagonists, refuses to throw in the towel. The film opens exclusively at the Downtown Independent.

Still got some fight in you? Check out our weekly guide to LA's best repertory theaters, exclusive screenings & midnight movies. This week we have special coverage of Kevin Smith's latest, Red State, and a new Laemmle theatre in an unexpected location.

That's all for this week (& the next two as well, daughter's birthday, moving & heading out of town for a work conference). Not to go out on a sour note, but if you want to see the full 3D version of Sex & Zen, you'll have to trek all the way out to Bakersfield. I'll meet you there on my way back.