No Carat Left Behind: Jewelry Dealer Robbed On The Way Home 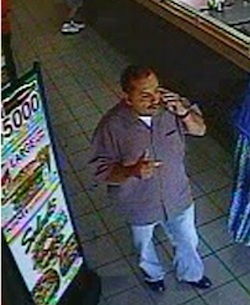 (Image via Tustin Police Department)
Tustin police detectives are searching for a pair of jewel thieves who snatched $260,000 worth of sparklies from a jewelry dealer on the evening of June 9, according to KTLA.

After arriving home from a Seal Beach jewelry show, the dealer was "boxed in by a black 'sports bike' type motorcycle and a white full size pickup truck," while he was stopped at the gate of his housing development, according to detectives.

The victim ran his vehicle into the partially open gate trying to escape as the suspect one "approached the victim's vehicle on foot, holding a crowbar in his hand and threatening to strike the victim."

Suspect two exited the pickup truck and robbed the victim of a bag containing jewelry estimated to be worth about $260,000. Both suspects fled in their vehicles. An investigation revealed possible suspects seen following the victim in Seal Beach. Officials have released suspect photos taken from surveillance cameras and are asking for the public's help identifying the men.

Anyone with information regarding this incident may contact Tustin Police Detective Colton Kirwan at 714-573-3249.