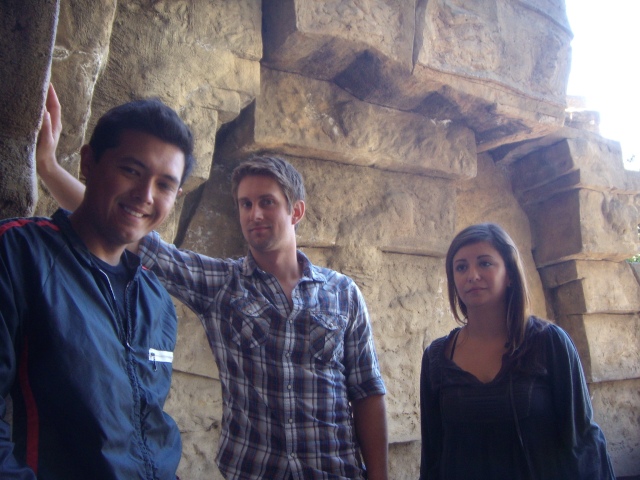 We met Paranormal EXP, one of LA's foremost ghost hunter squads, outside the Old Zoo in Griffith Park. Coming off the recent taping of an episode of Paranormal Challenge for the Travel Channel (airing August 26th) and a win at STU CON, Clare, Jason, and Marcus were happy to talk about some of their recent adventures as we wandered the empty cages and picnic benches on an all-too bright Sunday afternoon. Finding shelter in an old cage, we got to talking about the show, past exploits, and why LA is so great for ghoul hunting.

LAist: Tell me about this Travel Channel episode.

Jason: We can't really talk about it too much. Zak Bagans, the creator of the show, pits two teams against each other. We do an investigation of a location and are rated for knowledge of history, use of technology, teamwork, and evidence captured.

Marcus: Thousands of teams applied, out of a few of the teams, we were selected.

LAist: What's the deal with the Linda Vista Hospital? Why there?

J: Basically, it was built in the 1930s. The main reason it's haunted is gang members in the area were brought in there after fights, stabbings, and treated... It used to be the Old Santa Fe Railroad Hospital, before the gang violence erupted, railroad workers were brought there. It was closed after a bunch of malpractice suits. Nurses mistreated patients, stuffing them in closets and that sort of thing. It's a dangerous area, too.

LAist: What do you tell non-believers?

Clare: We're skeptics too. We've just had unexplained things happen to us and want to learn more. We don't automatically think it's paranormal. We want to look deeper.

M: We were at the Vulture Mine in Arizona.

C: All of a sudden we hear a voice say "Look up." And his back burned. He lifts up his shirt, and there are three scratches going down his back, like lines.

LAist: How did you meet each other?

J: Marcus and I work together. One of our other coworkers told me about Marcus, that he was into the paranormal. I came over and we nerded out over his ghost hunting equipment. We've taken a more logical approach since then.

J: There are lots of people, lots of cultures, and so many stories.

C: LA is rich with history, and has always hosted celebrities. Certain buildings, certain haunts are famous, like the Roosevelt Hotel, where Marilyn Monroe's ghost is supposed to reside. And many people like to chase celebrity culture.

M: We could go out anywhere, like Hollywood Cemetery, and find paranormal activity. We don't have to rely on private residences.

This interview has been edited for length.