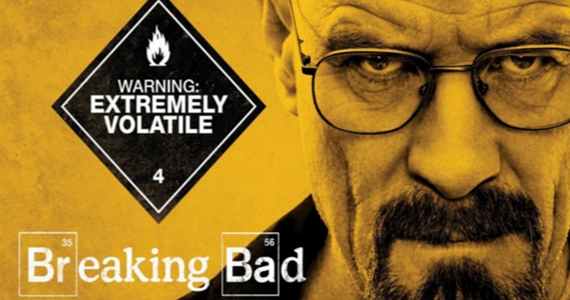 Just as I predicted here in a column a couple weeks ago, AMC has renewed "Breaking Bad" for a fifth and final season composed of 16 episodes, 3 more than the last 3 seasons. There was no way AMC was going to lose one of the most critically acclaimed shows on television and a show that has leapt exponentially in viewership since it's debut, including steady gains for the current season as well. In my discussions with people involved with the production, it seems that all the hand-wringing and doomsaying by other critics was simply internet hyperbole by those desperate to get some readers.

I know that many of us are very much looking forward to creator Vince Gilligan bringing his story about a cancer-stricken high school chemistry teacher-turned-meth-cooker full circle. It can't possibly end well for any of the characters, but it will be incredibly well told and portrayed by a cast that has become more remarkable as each season has rolled out.
—-
TLC has finally cancelled Kate Gosselin's "Kate Plus 8" with the last episode airing September 12th. The problem is that now there are about 50 similar shows on television that should also be cancelled, and TLC has a number of them - get back to work with the ax.
—-
I've got to admit I'm a bit worried about comedian Brody Stevens. I saw him do a spectacular set at Just For Laughs in Montreal about 3 weeks ago and I've been enjoying his Twitter stream quite a bit lately - but evidently his camping out at a San Fernando Valley Starbucks has been less than welcome for an employee there and Stevens was arrested and then handed over to the UCLA psych ward for a 2 week evaluation period. Evidently friend and former "Chelsea Lately" colleague Josh Wolf tried to visit Stevens in jail last week but was not allowed access, hopefully he was able to see him over the weekend at UCLA. I found Brody not only incredibly funny, but also very approachable and friendly when I met him in Montreal so I'm hopeful that this is all some kind of misunderstanding that will blow over soon.
—-
On a more positive comedic note, the fantastic Eddie Pepitone of The Long Shot Podcast and his hilarious daily video comic, "Puddin' Strip," is featured on both the most recent WTFpod with Marc Maron, as well as Scott Aukerman's Comedy Bang Bang podcast. All the linked stuff in this paragraph is hilarious and worth subscribing to.
—-
The TV Junkie Must-Watch Plan: "Adventure Time," "Anthony Bourdain: No Reservations," "James May Drinks to Britain," "Chelsea Lately," "The Colbert Report," "Jimmy Kimmel Live"

9:00pm Gloria: In Her Own Words HBO - The life of Gloria Steinem, feminist and political activist.

10:30pm The Big C Showtime - The Last Thanksgiving A secret is revealed at Thanksgiving dinner; Paul considers a different way to generate income.