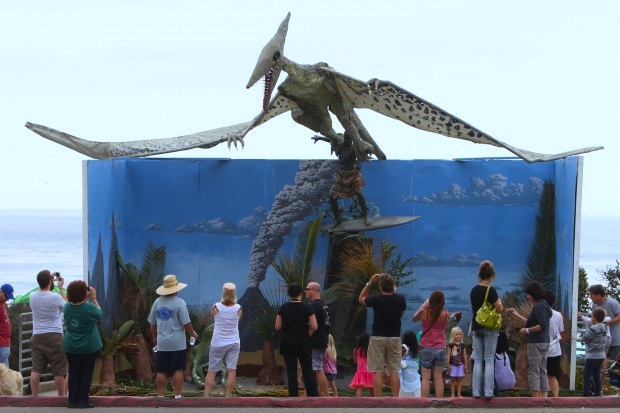 Photo by HeadTraderSam via Yfrog

Over the weekend, a Cardiff-by-the-sea statue named “Magic Carpet Ride,” — informally referred to as the "Cardiff Kook" — underwent another in a series of unapproved transformations at the hands of jokers or vandals or guerrilla artists or Miss Baker's 4th grade science class.

An elaborate, volcanic, prehistoric backdrop was installed around the statue and a giant pterosaur-esque bird was affixed to to the Kook's head. To up the realism quotient, palm trees and velociraptors were also added to the scene.

The official civic statue located off Highway 101 has "provoked controversy, mockery and late-night redesigns virtually from its installation in 2007," according to LA Now.

The subject, a young boy on a surfboard, would seem perfect for this northern San Diego County suburb, known for its surfing breaks. But surfers and artists say his dainty look is an insult to a macho sport. The name “Cardiff Kook” has replaced “Magic Carpet Ride” in the public consciousness. Bumper stickers have proclaimed “Dump the Cardiff Kook,” but officialdom has been unmoved.

Previously, the statue has impersonated Michael Jackson, Oprah Winfrey, British royals, and Vincent Van Gogh, and, on occasion, worn a variety of stylish outfits from a wedding gown to a military uniform. Last year, a "canvas-and-cardboard shark was built around the statue, seemingly devouring the surfer" ala Jaws.

The joke has worn off at Encinitas City Hall. The city recently spent $2,000 to repair damage done to the statue. A stern letter was sent to one of the artists thought responsible for one of the pranks.