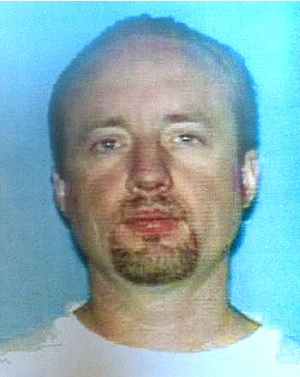 Image via LAPD
A manhunt continues for 43-year-old Brent D. Zubek, the suspect named in the Chatsworth double murder discovered by authorities in the 20400 block of Lassen Street, according to LA Now.

Few details, including why or when the victims were killed, have been revealed in the case although it is known that Zubek once lived in the house. It was unclear if the victims lived there as well.

Undercover officers spotted Zubek around noon Sunday while watching a Ford F-150 truck in the 9400 block of Sepulveda Boulevard they believed was connected with the suspect. After Zubek got into the truck and drove away, officers tailed the vehicle at normal speeds without using sirens. They decided not to pull Zubek over, Capt. Kris Pitcher said, because he was considered armed and dangerous and the officers were waiting for backup units.

Authorities said Zubek, who had a history of trouble and was previously convicted for Los Angeles area bank robberies, used a "series of maneuvers" to evade police before his truck was discovered in a Gelson's on Van Nuys Boulevard.

Zubek's mother made a public plea on Sunday afternoon, begging the suspect, whose father was a veteran Los Angeles County Sheriff's Deputy, to turn himself in, says KTLA.

"We really wish you would turn yourself in. I fear that if the police find you before you turn yourself in, things are going to be really bad," Carole Zubeck said. "Everybody loves you."

Zubeck is described as a White male with blue eyes and brown hair. He is approximately 5 feet and 11 inches tall and weighs roughly 185 pounds. He is believed to be armed and dangerous.