Capybara Caper! The Bigfoot Of Rodents Spotted In California 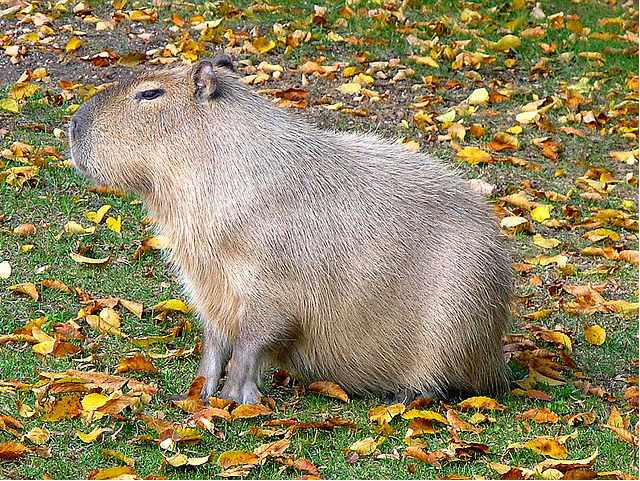 The first unlikely sighting of the 100-120 pound creature was reported about three years ago at a Paso Robles golf course, according to a patrol lieutenant with CA Department of Fish and Game. Capybaras are native to South America so the report was dismissed as a beaver and that was that. Until it was spotted chasing a Labrador retriever less than two years later.

The dog's owner took aim with a shotgun but was unsure if he hit the animal. An investigator confirmed the footprints. The Department of Fish and Game reassessed the "beaver" report, but assumed the capybara was dead.

Last month, the resilient critter resurfaced, this time at a water treatment plant about a mile away from the gun fight. "We discovered it one morning in our water ponds," said Chris Slater, a division supervisor at Paso Robles Wastewater Treatment Plant. "They came up to tell me, and I said, 'Oh come on, you guys, what have you been smoking down there?'"

Workers told a local television station that animal was about knee-high and the size of small pig. According to the San Diego Zoo, Capybaras grow to be about 2 feet tall and use "barks, chirps, whistles, huffs, and purrs," to communicate.

"One operator said, 'I've seen him a couple times, but I didn't say anything because I didn't want you guys to think I was nuts,'" said Slater.

The animal hasn't been seen again but the plant's six wastewater pools make an enticing case for the capybara's highly aquatic tendencies. Tognazzini speculates that the capybara may have been someone's escaped exotic pet. "If it's seen more few more times, we would try to live trap the animal," he said. "If we had a reasonable chance, we would do so."