Weekend Movie Guide 08/05: Rise of the Planet of the Apes & Bellflower

RISE OF THE PLANET OF THE APES courtesy 20th Century Fox

My initial reaction to Rise of the Planet of the Apes was "take your stinking paws off me, you damn dirty reboot!" In fact, the blockbuster origin story may be the missing link between the classic Apes series & modern moviegoers.

On the surface, Sundance darling Bellflower shares characteristics of many mumblecore films. The low budget, local production features crew crossing over into cast, and a story aimed at awkward 20-somethings about how awkward it is to be an awkward 20-something. But take a look under the twee hood and you'll find everything these films lack: a car that goes boom! Medusa, Bellflower's car star, sports some serious firepower, in the form of surveillance cameras, smoke-screens & rear-exhaust flamethrowers. 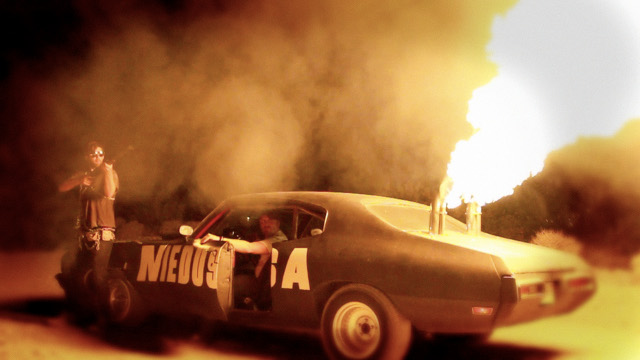 It's no picture car either. Filmmaker Evan Glodell (cinematographer for this year's LA Shorts Fest contender Before Breakfast), who plays a guy that builds a post-apocalyptic muscle car, actually built the fully-functional Medusa over the course of filming. Bellflower's bold style & bizarre bleeding of art-into-life-into-art are sure to ignite the screen at the Nuart, blowing away plenty of minds in the process.

Glodell & Medusa will appear for Q&A's after the 7:30 show tonight, tomorrow & Sunday. Should you see anyone flipping any switches, run.

Are you an adventurous film-goer? Check out our weekly guide to the best of LA's repertory theaters, exclusive screenings & midnight movies!