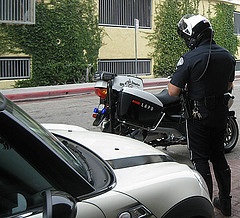 Photo by Lucyrk in LA via the LAist Featured Photos pool
Hate traffic ticket quotas? You're not alone. Ten LAPD motorcycle officers are suing the city for what they claim were illegal quotas forced on them, as well as harassment from higher-ups for not meeting those numbers, reports KTLA.

Ticket quotas are against the law, but these officials claim that didn't stop the department from setting them. The officers say that when they refused to implement the quotas, they were punished.

The lawsuit was filed last week, and history is on the side of the plaintiffs: a similar suit brought by two LAPD officers earlier this year yielded them $2 million.