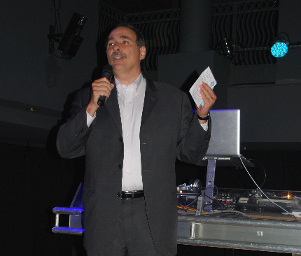 With the time suck that was the debt ceiling deal finally signed, it's time for President Obama to get back to raising money for his re-election campaign. Fortunately for the campaign, President Obama is celebrating his birthday today (the big 5-0), which provides ample opportunity to celebrate his accomplishments while collecting campaign cash.

The program began with an unfocused but animated speech by Mayor Villaraigosa, whose long-winded series of platitudes were difficult to hear over the buzz of people trying to order another drink from the open bar. Following the mayor was the always polished Eric Garcetti, who chose to highlight the President's connections to Los Angeles, including his two years at Occidental College. Garcetti rallied the troops by pointing out how important Los Angeles was in the 2008 election, more than pulling its weight in campaign contributions and phone banking.

Garcetti then introduced former San Francisco Mayor Gavin Newsom to thunderous applause, begging the question, "Who is the more handsome of the two California mayors?" Newsom declared the current administration to be the "most accomplished presidency in modern history." Newsom supported this bold statement by listing many of Obama's accomplishments: increased spending on research and development, investment in clean energy, a focus on higher education, legislation supporting equal pay for equal work for women in the workplace, and the advancement of gay and lesbian rights. Newsom went as far as saying, "No president has done more for the LGBT community. It's a fact."

The keynote speaker last night was Obama campaign adviser David Axelrod, whose speech took on a more personal tone. He discussed the early days of the first Obama presidential campaign, when there were only eight people in the room, including Michelle Obama in 2006. The most moving moment of the night was when Axelrod told the story of how he almost went bankrupt because his HMO didn't adequately cover expenses related to his daughter's severe epilepsy. Fast forward thirty years: "The night that we passed the health care bill, almost entirely because of the persistence of the President of the United States, we were watching in the Roosevelt Room in the White House, which was right next to my office. I got up and went into my office and I closed the door. And I was overcome and I cried. I cried because I knew that families in the future would not have to go through what my family had to go through. It was because of him, and it was because of you."

While last night was a sold out event, the President has some ground to make up after a slow month. In an interview with RealClearPolitics, Obama campaign manager Jim Messina said, "We're going to raise significantly less in the third quarter than we did in the second quarter. We will not be able to replace all of these events just because of his busy schedule. We always knew that he had his job and we had to do this around his schedule, and the truth is we just have to deal with canceling a month's worth of events."

In an email to campaign supporters today, First Lady Michelle Obama wrote about the toll the Presidency has taken on her husband. "Every day, I see Barack make choices he knows will affect every American family. That's no small task for anyone - and more proof that he's earning every last one of those gray hairs."

Since Los Angeles continues to be a major source of funding for national political campaigns, expect plenty more fundraisers over the next 15 months.