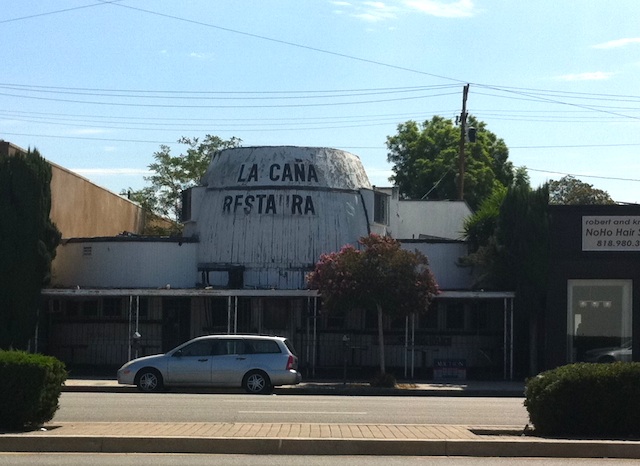 If you've ever driven through the NoHo Arts District and noticed a curious barrel-shaped building and its run-down front and wondered what the heck it was, and, moreover, why no one was doing anything about it, wonder no more: This former restaurant is going to be restored and reopened soon. Hooray!

The building, built in 1941, was last La Caña, a flamenco showcase, that closed in 1984. It has taken nearly 30 years to find a way to get what Los Angeles Magazine's history buff Chris Nichols calls the "decrepit restaurant" on the road to recovery. In fact, it was Nichols who got the wheels in motion when he applied to have the spot designated a City of Los Angeles Historic-Cultural Monument. The space was awarded the designation in 2010.

Once upon a time, the restaurant was the Idle Hour Café run by a man and his wife who were living out their California dream. Nichols attests it took over a year and a combined effort to secure a renewed future for the curious and historic building. Last weekend, all the work of Councilman Tom LaBonge, locals, the LA Conservancy, and the Museum of the San Fernando Valley, Nichols, and Bigfoot Lodge owner Bobby Green—who was ready to sign on to take the restaurant under his wing—"all came down to a mundane county auction," says Nichols.

Green won the auction, and now the work can begin to bring the Idle Hour Café back to life. "Their plans for a full restoration of the place are amazing and wonderful and I’ll meet you all there for a drink when it reopens sometime next year," says Nichols.