Another Walkability Survey, And Why We (Don't) Walk in L.A. 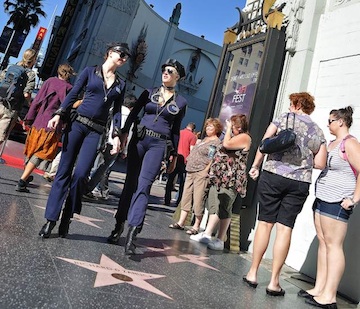 Photo by Herr Hans Gruber via the LAist Featured Photos pool
Following in the footsteps of the recently-released Walkscore rankings of walkability in U.S. cities, America Walks has just announced the findings a survey of "avid walkers" to help determine what makes a city "walkable," according to Switchboard, the Natural Resources Defense Council blog.

So what makes people walk more in a given area? It's all about perception. "A recent survey of 7,000 “avid walkers” found [that] within each level of population density (low, medium, high), the proportion of frequent walkers increases as the perceived walkability of the neighborhood goes from low to high," explains Switchboard. If you reside in West Hollywood, then, for example, and are aware of its #1 slot among Californian cities for walkability, well, you are more likely to actually get walking.

* Infrequent walkers said they would be much more likely to walk if their physical environments were more conducive for walking. * More school children walk to school if their parents are frequent walkers. * The biggest problems confronted by walkers (in order of importance) are: distracted drivers, speeding motor vehicles, unsmooth sidewalks, not enough sidewalks, and poorly-lit streets

Based on this handful of findings, it seems Los Angeles, in general, is a poor candidate when it comes to walkability, considering our sometimes less-than-user-friendly urban terrain. Though you may have used Walkscore to calculate the walkability of where you work, live, or hang out on two feet, you can also try a checklist put out by Partnership for a Walkable America, yet another walking advocacy group, that can help you determine how walkable your community is.