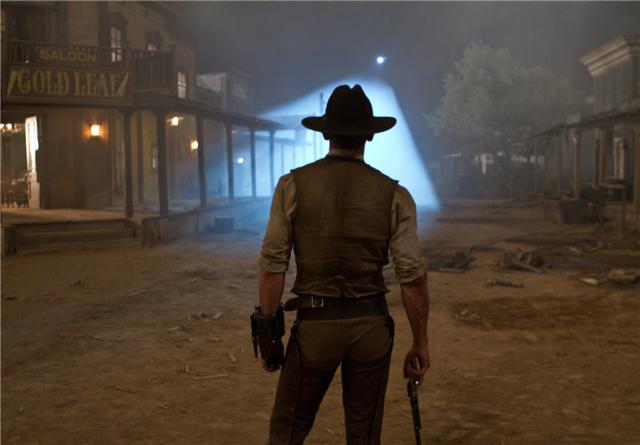 We like cowboys, we like aliens, but we're having trouble rounding up excitement for Cowboys & Aliens. The credits pack a lot of heat, but where's the cattle?

Daniel Craig leads the cast as a drifter with an alien ace up on his sleeve. Harrison Ford squares off against him as a corrupt sheriff. Supporting cast includes Sam Rockwell, Paul Dano (There Will Be Blood), Abigail Spencer (Mad Men) & Keith Carradine (Dexter). The Grade A talent behind the camera carry nerd cred a mile long: Jon Favreau directs; Roberto Orci & Alex Kurtzman (the Star Trek reboot), Damon Lindelof (Lost) and Mark Fergus & Hawk Ostby (Children of Men) contributed to the screenplay; and producers include Ryan Kavanaugh (3:10 to Yuma), Ron Howard & Steven Spielberg.

For such a pulpy title, the trailer's awful serious. There's none of the humor that brought Iron Man down to earth, and the sleepy desert setting supplies a mere handful of buildings to blow up. Even with Craig's extraterrestrial equalizer, it's hard to buy this as anything close to a fair fight. Luckily, it isn't the only alien action this weekend.

It's accents against aliens at ArcLight Hollywood when space invaders Attack the Block. The South London-set action-comedy finds a group of teens defending their housing project - and maybe the world - from fanged space creatures. The film won the Audience Award last month at the LA Film Festival and looks to launch its intergalactic irreverence this weekend. Executive producer & all-around excellent Englishman Edgar Wright hosts a special Q&A following tonight's 8:30 showing.

Are you an adventurous film-goer? Check out our weekly guide to the best of LA's repertory theaters, exclusive screenings & midnight movies. In honor of the forthcoming Fright Night remake, we've covered a few choice summer frights.