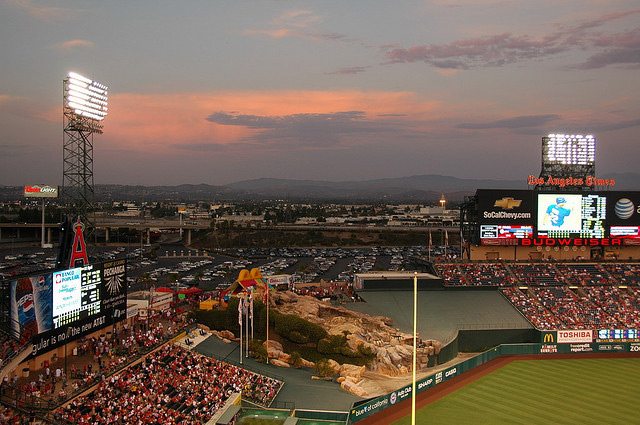 Photo by Knot via LAist Featured Photos flickr pool
The Angels may be in the middle of a 10-game road trip but that didn't keep a display of power away from Angel Stadium this week. In fact, there may be nobody around to turn the power back on when the team returns next Tuesday.

Ticket takers, ushers, janitors, and other workers at Angel Stadium may call a strike and walk out at any moment following a union vote on Thursday to authorize a strike in response to wages being frozen.

The SEIU claims Angel Stadium workers are the lowest paid at any major stadium in California in spite of having the fifth-highest attendance in the league, reports the L.A. Times.

While these workers are needed to get fans into the stadium's 45,000 seats — literally — hot dog and beer sales, which are operated privately by Aramark (and presumably those boredom-killing 4g tablet rentals) would be unaffected by the strike.