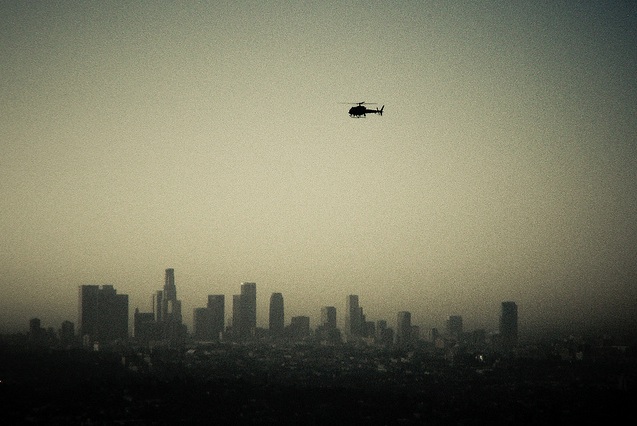 Photo by Mark Luethi via the LAist Featured Photos pool

The ghetto bird is a daily sight, and sound, for Angelenos, and many on the ground are fed up. Case in point: Just last night, @youbeencrushed Tweeted us: "@LAist can u find out why helicopters have been in the sky for hours and then tell them to stop???"

While you can put a call through to the authorities to see if they'll let you know what is going on where you live (and are probably trying to sleep), that still doesn't stop the choppers clogging the skies to cover celebrity misbehavior like at Charlie Sheen's house, the recent Royal visit, or a media bonanza like Carmageddon.

Congressman Howard L. Berman, however, wants to legislate the noise away. He put forth his "Los Angeles Residential Helicopter Noise Relief Act" on Thursday, with the hopes of reducing the noise disturbance from low-flying helicopters in Los Angeles County.

Notes Berman in a release:

“Residents deserve relief from the thunderous clacking of helicopter blades hovering directly over their homes, and instead all they’ve been getting is the runaround from government agencies. The buck stops here because it is simply unacceptable for residents to be forced to contend with these brazen helicopter operators on their own. This bill requires the regulations that will give residents the relief and increased safety they are so desperately looking for.”

The bill, H.R. 2677, "would require the Federal Aviation Administration to establish rules on flight paths and minimum altitudes for helicopter operations in those areas within a year of the bill's being signed into law," reports the L.A. Times. Military and emergency responders would be exempt.

Berman says the amount of noise produced by the choppers has inspired a lot of complaints, and the number of helicopters swirling above has hit a "ridiculous point." One of Berman's Valley constituents, Richard Close, President of the Sherman Oaks Homeowners Association, agrees, and takes the point further by adding that the television choppers, often following a car chase suspect, are invading our privacy by filming our backyards and broadcasting the footage live. Close calls our chopper-happy skies "the Wild, Wild West."

Berman may find a hard road ahead for his bill in the House of Representatives. Additionally, the FAA does not impose minimum altitudes for helicopters over residential areas as they do for jet aircraft.