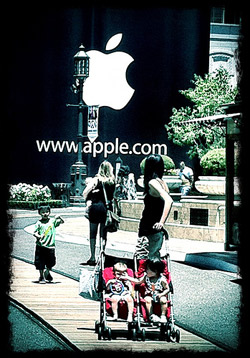 June 30 photo by Kendyl Young via Flickr.
The newest Apple Store is opening at The Americana at Brand this weekend, across the street from one of its first locations — the Glendale Galleria. Only this one's much larger.

Apple announced in an email to customers this week that its newest location will open on Saturday at 10 a.m. at The Americana at Brand, according to the Glendale News-Press. Make your Genius bar reservations now.

It wouldn't be an Apple store grand opening without a phalanx of geeks, gadgeteers and curious shoppers on hand but Apple's giving away t-shirts to the first 1,000 customers just to make sure.

The Americana store is the first in a line of second generation Apple 2.0 stores to open, reflecting both an updated design and a shift to focus more on services for product owners and new buyers. This next-gen retail experience was designed by a team led by Apple CEO Steve Jobs and Apple’s chief designer Jony Ive. The new store is reported to have 50 seats at its Genius Bar (opposed to the 3-10 at other L.A.-area Apple Stores) and will have various areas designated to help users get set up with their new Apple gear. These will be called "Startup Sessions," reports 9-to-5 Mac.

At about 14,000 square feet the new store is among the larger Apple Stores in the world but far from the largest — the 23,000-sq. ft. Regent Street UK location and the Grand Central location announced this week.

The Americana store boasts a flashy next gen look as well (though it remains curtained until Saturday):

Externally, the store is slightly different than the Apple Stores we have become accustomed to. The Americana at Brand location will trade the classic silver front with glass doors for an all glass front. That’s right; all glass - Apple’s newish style. In addition, Apple’s iconic logo will float in this glass, similarly to how the Apple logo floats in the Fifth Avenue store’s famous glass cube or the Upper West Side store’s front. The inside of the store features a very open floor plan, that is fairly similar to the chain’s other locations.

It will become Apple's 332nd retail store (not including the fake stores discovered recently in China), number 239 in the U.S and the 20th store in the L.A. region. And it's opening across the street (about 600 feet) from the Galleria store, which will remain open. The Glendale Galleria store was the second Apple Store to open, just hours after the first location in Tysons Corner, Virginia in May 2001.

The new store is part of shopping center magnate Rick Caruso's plan to expand the 3-year-old Americana at Brand. The Nordstrom store at Glendale Galleria is expected to move into a 3-story building in the expanded Americana in late 2013.