Red-Light Cameras Are History and So Are Those Unpaid Tickets 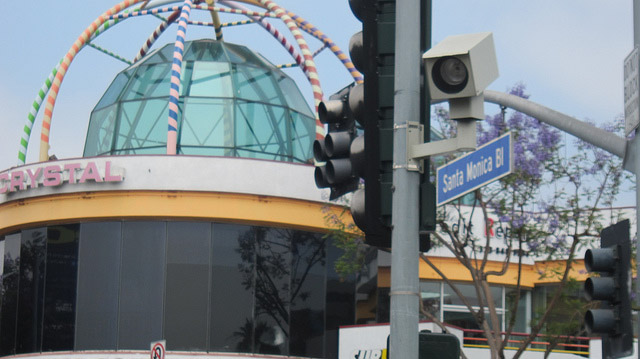 The red-light cameras at Santa Monica / Fairfax in West Hollywood are unaffected. (photo by Andy Sternberg via Flickr)

The delayed city council vote comes more than six weeks after the Police Commission voted to recommend canceling the program, which began in 2004 and has been a money sieve for the city ever since. While the 32-camera system was expensive to maintain, it was also difficult for the city to collect the fines for the moving violations, which would appear mysteriously in the mailbox of the vehicle owner days after the fact.

In June 2010 City Council extended its wasteful contract with Scottsdale-based American Traffic Solutions, in spite of the city's almost entirely symbolic boycott of Arizona-based companies in light of that state's passage of SB 1070.

Can the city still enforce any outstanding tickets generated by the red-light camera program? The fact that city hall can't seem to agree on an answer would seem to indicate: no. The L.A. Times notes:

The City Council vote comes after this week's surprising revelation that authorities cannot force ticketed red-light camera violators to pay the fine. For a variety of reasons, including the way the law was written, Los Angeles officials said the fines were essentially "voluntary" and that there are virtually no tangible consequences for those who refuse to pay.

"Virtually no tangible consequences" sounds like a free pass to us. As for past red-light camera generated tickets we were foolish enough to pay in the past (at up to $476 per violation), don't expect any IOUs.

In related news, Orange City Council voted unanimously to ban red-light cameras on Tuesday and Westminster is putting the issue on the November ballot, according to the OC Register.

Regardless of what an incredible nuisance red-light cameras were for all parties involved, consensus remains that it's still uncool to run a red light.