T-Mobile, Angels Team Up to Cure Boredom at the Ballpark 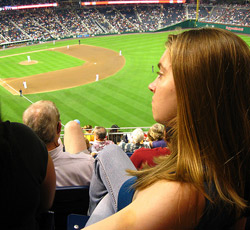 Photo by ap2il via Flickr.
The Angels kick off a 10-game road trip today but when the team returns in August, Angel Stadium will have some gadgets available to help fans ward off the potential boredom of nine innings of American League baseball.

T-Mobile on Friday announced a partnership with the Angels to provide fans with a tablet rental program, allowing fans to watch TV, read magazines, chat with friends and hopefully not get hit in the face by a foul ball.

For $10 fans will be able to rent either a T-Mobile G-Slate or a Samsung Galaxy Tab and to pretty much ignore the game and surf the web over a 4g mobile connection from the comfort of their seats at Angel Stadium. Included: a free game-day program optimized for the tablet!

The Angels have the fifth-highest attendance in the major leagues so far this year, averaging 86 percent of seats sold per game. The team is hanging in on the field as well, 3 games behind the AL West-leading Rangers. And hey, the team's doing everything it can to fill seats, including 5 post-game concerts (of which three remain) including Ludacris on August 6.