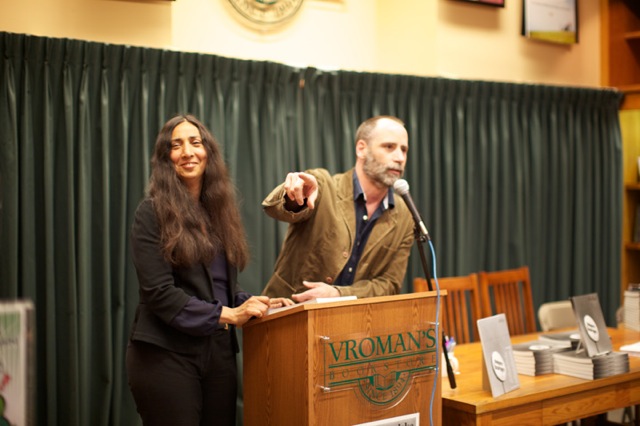 Laurie Ochoa and Joe Donnelly at a reading at Vroman's in Pasadena. Photo courtesy of Slake.
Los Angeles is not known for its bustling literary scene. Often overshadowed by the graying publishing houses and staunchly entrenched magazines of New York, LA's reputation as a city with little appreciation for the written word persists.

But Laurie Ochoa and Joe Donnelly, former editors at LA Weekly, believe that LA is a place where stories and storytelling abound. Seeking to expose our city's untold narratives and raw writing talent, they launched Slake, a quarterly literary journal, in April of last year. Now on its third issue, Slake publishes long-form journalism, memoir, fiction and poetry with a slant towards LA.

Here, we talk to Ochoa and Donnelly about their goals for the magazine, their views on the readers and writers of Los Angeles, and why LA is the new New York.

LAist: Tell me about how you decided to start the magazine.

Laurie Ochoa: We wanted to do what we love doing most, which is work with interesting writers, work with interesting artists and talk about Los Angeles, and print is the way we know how to do that best. And if you’re going to do something in print, it can’t just be type on a page anymore, it has to be a whole experience. It’s got to look gorgeous, it’s got to feel good, and in your hand it has to be something you can keep.

Slake is purposely designed so it’s more like a book, not like a magazine you can recycle. We want you to hold on to it, we want you to come back to it, find great stories in it, find a great artist. We also want to show off the individual voices of people in Los Angeles - there’s so much great talent here.

Joe Donnelly: The media landscape here in Los Angeles is, in our opinion, not up to par with what the city has to offer in terms of its intellectual and cultural life. When we were at the LA Weekly, we found a good outlet for showcasing talented writers and artists, but things have changed.

One of the challenges of being in LA is that, in order to have a cultural impact in a lot of ways you have to go through the filter of New York, and we don’t think that’s appropriate. In our minds, LA is sort of the tip of the spear in terms of the cultural, artistic and intellectual development of this century, so we want to tell the stories that take all those factors into account. LA is a dynamic and rich place, and it should have its own signature publication.

LAist: Alongside the stories, Slake features a lot of original artwork. How does the art function alongside the articles?

LO: The consistency of the logo and the feel of the book is the same, but each issue has a very different look. In this third issue we worked with a very specific artist named Michael Dopp. He worked together with our art director Alex Bacon to create these amazing title pages so that every story, every poem has an element of Michael’s work in it, and then Alex made it look beautiful with the type and placed things.

JD: We wanted the first issue to be really hand-crafted, which every page of it was.

LO: Dan Peterka hand-lettered all the letters - we talk about slow journalism, this is slow art direction - but it was so gorgeous. He would do these pages with sometimes just words and colors that were like great paintings.

One of the people to pay attention to also is Matjames. He is a real, true, crazy artist. His work is a graphic novel documenting Katrina and the aftermath and the sort of refugee experience in LA.

LAist: So the art is really a key piece of pulling the whole thing together and making it not just a literary journal.

JD: Yes. We want to create a visual language and iconography to go with the stories. It’s something I hope people pick up on - it’s subtle but it’s something we care a lot about.

LAist: What do you see in terms of the Los Angeles literary scene? Is it big, is it small? It’s certainly not what people think of when they think of LA.

LO: It’s big and it’s small. It’s both. There are always new writers that you come across that you haven’t heard of, and that’s always really exciting. We love to find new voices. And there are so many interesting people coming up that are may not be the big famous names yet, but maybe we’ll take them there.

JD: But there are so many people — even if they’re not writing in the literary world, such as it is — there are so many television writers and film writers and really talented people here. In our first issue there’s a TV actor, David Schneider, who wrote a piece that won the 2011 Los Angeles Press Club Award for best magazine feature, and now it’s being turned into a TV show. In the second issue a young lady who is a horse trainer wrote a piece that’s now being made into a book.

LO: There are so many talented writers here, it’s just that they haven’t been given a place where they can do the kind of storytelling and writing that goes outside of the TV or film realm. And the people who are showing up at our readings, who are showing up to help out are young - they’re in college, or just out of college, and they’re the ones who are excited and passionate about it.

LAist: Do you envision incorporating new media at some point?

JD: There’s going to be a time and place when really rich storytelling does happen in new media, but it’s not there yet. We don’t want to just retrofit something - we don’t want to plug a square peg into a round hole, which is what a lot of these papers and magazines kind of do with new media. We think that there’s some new way of doing it, but we don’t want to do it till we figure it out.

LO: There are just so many [websites] already that we really want to come out with something different. In the process of doing this quarterly, we have had so many people who want to be part of what we’re doing, and interesting voices who want to contribute, that one of the reasons we’d want to make a website is to have a place where people want to start coming, so we can tell stories that way.

JD: The delivery system is what’s at work here, and that’s something that isn’t worked out yet - how to deliver really rich storytelling. There are some places that do it well and some that don’t do it well, but I don’t think there is anyplace I have yet to see where you want to sit down and stay for three hours [online]. Until we replicate that feeling, I think we offer the richest delivery system you could possibly want.

LAist: New York has very strong voice in terms of blogging and publishing, but the market there is oversaturated and it seems like a lot of what’s produced online is fluff. Do you think that LA provides a particularly fertile ground for incorporating longer-form journalism into social media and blogging?

JD: In New York it’s a lot of people talking to their friends. They all sort of grew up together and went to the same schools together, and then they come back to the same places together. They don’t - speaking of generalizations, but I know enough of them -they don’t know a fucking thing about the way the real world operates. In LA you tend to have people coming here to do something and create something, renew themselves, reinvent themselves, work, find new lives, and it’s a traveling process. You actually have a lot of people who travel very far to get here. They don’t just go from their private school on the Upper East Side to their Ivy League college and then back.

LO: Well, all the reasons people used to go to New York they now come to LA.

LAist: There’s a concern that the longer-form journalism that Slake publishes might be falling by the wayside. Based on what you’ve seen with the magazine so far, do you think that there is enough desire for that kind of writing for it to be brought back?

LO: It’s not going to be that there are these glory days of things coming back completely, but I think it could be [reinterpreted], and I do think there is a desire for it. There are other things percolating in the city - the LA Review of Books, for instance. I was just an advisor for an NEA fellowship program, where there was this popup newsroom called engine28. It was amazing how many people who work at daily papers - who are not beginners, they are all kinds of journalists - and they all were craving one-on-one attention from an editor. So it’s not just about what’s online, it’s about the state of journalism and resources.

Slake is holding a reading from their latest issue at Vroman's in Pasadena on Sunday, 7/24 at 3:00 p.m. Also, click here for their summer subscription special — subscribe and get one issue free! — that runs out on July 30.