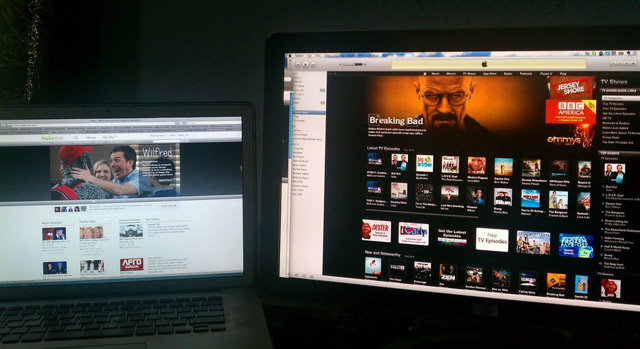 Will Apple (iTunes at right) make a bid for Hulu (left)? And would this be a good thing?

Steve Jobs has $76 billion dollars burning a hole in his black mock turtleneck. Apple's value has skyrocketed more than 300 percent in the past couple years owing much to growing iPhone sales and the success of the iPad. But Apple's future success rides not just on product but on content — specifically audio and video downloads and paid streaming content.

If you can't beat your competitors, acquire them. And Hulu, the streaming video service owned primarily by the network triumverate of NBC Universal/Comcast, News Corporation and Disney, with a rumored valuation of about $2 billion and a wealth of streaming content agreements is said to be pursuing a buyer.

After reporting record earnings this week (again), Apple is looking to make its move to shore up it's streaming video services, which have been overshadowed by Netflix and Hulu. The rumored acquisition talks were first reported by Bloomberg based on two anonymous sources:

While this remains little more than speculation, it's raised the antennae of the tech and streaming media world. Yahoo and Microsoft were also reported to be in Hulu talks in recent weeks.

Should Apple acquire Hulu would it lead to a better product? Or would Apple just dissolve the service as it did soon after acquiring music streaming service Lala in 2009?