Got PMS?: California Milk Board Shuts Down Sexist Ad Campaign 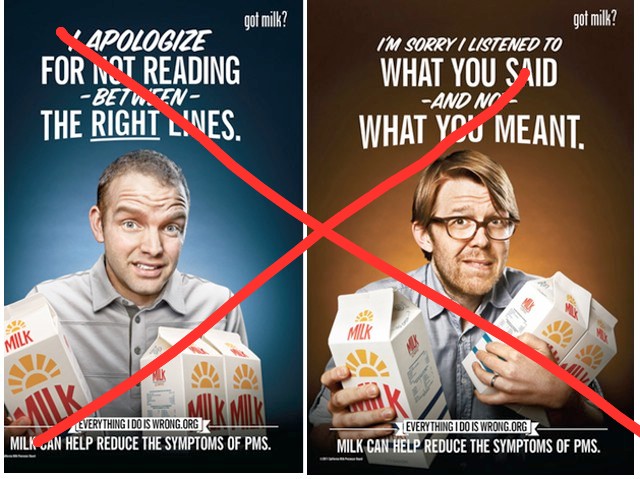 Hey guys, check it out — bring home many gallons of milk and you'll no longer be a victim of your girlfriend/wife/mother's general premenstrual bitchiness.

Such was the gist of the latest campaign from the California Milk Processor Board before it was shut down prematurely, a victim of its own poorly executed bad humor.

Following pressure from several groups including a change.org petition launched by Ms. Magazine, the campaign website EverythingIDoIsWrong.org morphed into GotDiscussion.com Thursday morning. The campaign was supposed to run through the end of August.

The Milk Board, administered by the California Department of Food and Agriculture and best known for the "got milk?" campaign, posted the following quasi-apology (aka "sorry to the few humorless idiots we offended"):

Over the past couple of weeks, regrettably, some people found our campaign about milk and PMS to be outrageous and misguided - and we apologize to those we offended. Others thought it funny and educational. It has opened up a topic that affects women, of course, but also relationships. We have reproduced a representative sampling of the reaction here....

The campaign was introduced on July 11 by the California Milk Processor Board and its longtime advertising agency, Goodby, Silverstein & Partners in San Francisco, part of the Omnicom Group. The centerpiece of the campaign, which declares that “milk can help reduce the symptoms of PMS,” was a microsite, or special Web site, that uses the Web address everythingidoiswrong.org and addresses itself to men as “your home for PMS management.”

The Change.org petition found no humor in the campaign:

Centered on the claim that milk helps reduce PMS symptoms, the “Everything I Do is Wrong” campaign features a website for men on how to deal with their crazed, menstruating women. The website features a “vocabulary sensitizer,” “”puppy dog eye-ser” and “PMS rating index.” There are also a series of print ads showing men clutching cartons of milk, apologizing to their enraged girlfriends and wives for things they “did and did not do” and “not reading between the right lines.”

So much for curing PMS. Guess we'll have to stick with good ol' milk mustaches.