New Downtown Events Center Will Benefit AEG But What About Us? 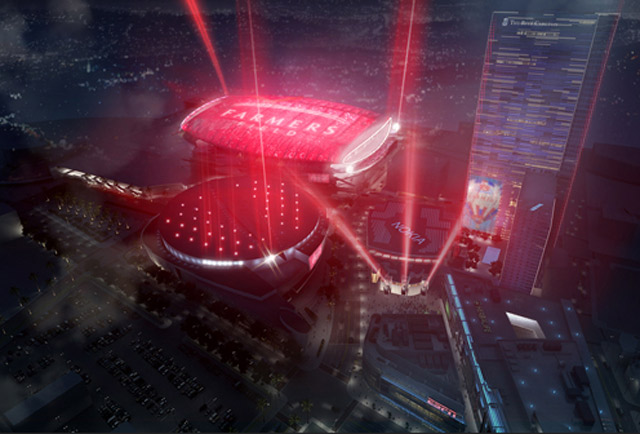 Rendering of new stadium and convention center at night as designed by Gensler. The 1.7 million sq ft. stadium would seat up to 78,000. It is rumored that the proposed project would also move the beach to within blocks of downtown.

The proposed football stadium and events center that would add to AEG's downtown L.A. Live empire has yet to get a green light from the city pending a thorough review or how the downtown monolith would benefit Angelenos. Aside from providing fertile grounds for an NFL team at what would be called Farmers Field.

We can be certain the center would greatly benefit AEG, as it would serve as a great incentive and standing advertisement to its hundreds of overpriced condos and rental units in the area. But what is the benefit to taxpayers?

While the city's Chief Legislative Analyst Gerry Miller and City Administrative Officer Miguel Santana continue poring over the facts, City Council President Eric Garcetti summarized the pertinent issues that still need to be addressed in a letter to Miller and Santana. Garcetti insists the following points be considered by the City Council's Office of Economic Analysis:

Repayment of bonds used to finance the new Convention Center must be by way of near certain revenue sources, such as property taxes. This would likely require a bond amount far lower than the approximately $300 million that has been discussed.

We'd also like to add to the record: The NFL team that makes this events center its home must not be the San Francisco 49ers.

Anything else he's missing?

AEG recently released the cutesy video below to state their argument. In short, lots of animated stick figures will want to fly to L.A. on airplanes and spend lots of money. Sounds good. Unfortunately Farmers Field's three-pronged slogan (It's about Jobs. It's about Pride. It's about Time) leaves out the obvious "It's about gridlock on the 110."