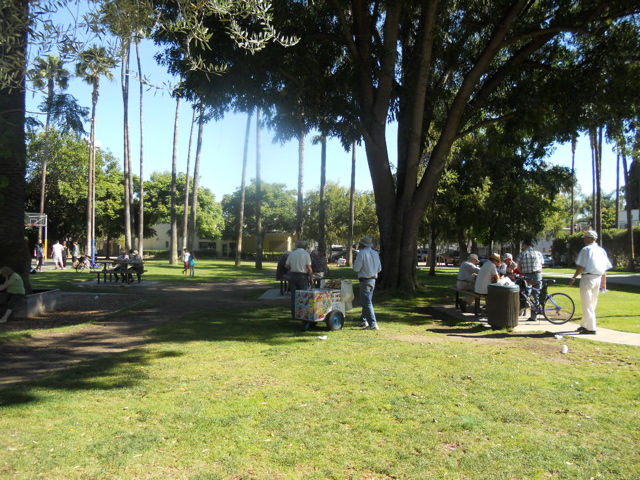 On the eastside of West Hollywood on Santa Monica Boulevard lies a microcosm of the city itself. Plummer Park is the perfect mix of WeHo's diverse population and offers green and shaded spaces, amenities, activities and much, much more.

Plummer Park is generously populated with picnic tables and benches. Some table are occupied by elderly gentlemen of Eastern European descent embroiled in their daily chess or backgammon matches while the benches or park walkways are filled with their female counterparts, chattering in their native tongue. Lest you think this is a senior's park, people of all ages and cultures are represented. There is plenty of grassy space in the sun or shade to spread a blanket. It's a great spot to picnic, sunbathe, read, take a siesta or play with the kids. Kids can be of the two or four-legged variety of which there are plenty of both. 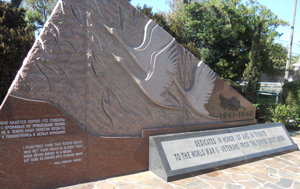 Photo by Ana Bustilloz/LAist
Plummer Park also has a big playground with slides and swings, a basketball court, tennis courts, and even a paleta man selling frozen treats. In the center of the park is a monument to World War II veterans from the former Soviet Union.

The City of West Hollywood offers an array of recreational activities including art, self-improvement, group exercise and day trips. Many of these classes take place at the recently rebuilt Community Center in the park. Many residents may know the Community Center and the park's other two halls as the place where they vote in local and national elections.

Plummer Park is host to the Helen Albert Certified Farmer's Market which takes place every Monday from 9am-2pm. It's the perfect size: not so small that there isn't any variety and not too big as to overwhelm. In addition to great organic produce, baked goods and prepared foods, there are several standouts including delicious rotisserie chicken, fresh fish, a knowledgeable cheese seller, and tangy smoky BBQ.

Throughout the rest of July and August, theatre lovers can enjoy a free musical production of Shakespeare in the Park's As You Like It.