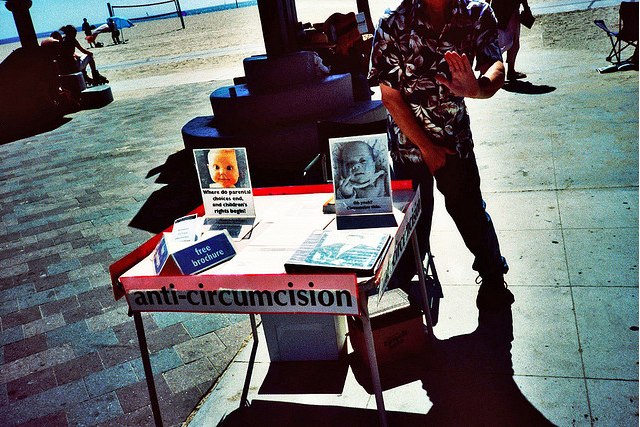 Santa Monica Considers Ban on Male Circumcision / Read the post here.
As San Franciscans gear up to vote on whether or not circumcision should be banned, those opposed to the procedure may have a new victory to point to. After a botched circumcision in 2003 at a Los Angeles medical clinic, a family will receive $4.6 million in damages and lawyers' fees, reports the Long Beach Press Telegram.

Melanie Hall, the mother of the boy who's circumcision went wrong, filed a lawsuit in 2007 against Miltex Inc. and its parent company, Integra Life Sciences Holding Corp., a company that makes devices used by doctors to perform circumcisions. In the suit, Hall alleged that the company was at fault for producing a product that didn't work properly, resulting in 85% of the tip of her son's penis being removed instead of only the foreskin:

"Because of the defective design of the circumcision clamp, there was no protection for the head of the penis and Dr. Pickett was unable to visualize the (head) when excising the foreskin," according to the plaintiffs' court papers filed regarding the settlement. "For this reason, an amputation to the (head) of plaintiff's penis occurred."

The boy is now eight, and according to court documents is going to need ongoing medical and psychological treatment.