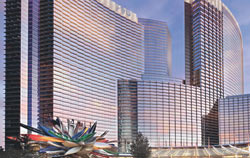 At least six guests at Aria Resort and Casino in Las Vegas' City Center contracted Legionnaires' disease over the past couple weeks.

Legionnaires' is a form of pneumonia that may be deadly in 5 to 30 percent of cases, says the Centers for Disease Control.

Aria sent out letters warning recent patrons on the advice of health officials. According to the L.A. Times:

Aria's letter tells guests who stayed from June 21 to July 4 that they may have been exposed to the Legionella bacteria, which spreads the disease. The hotel says water tests detected "elevated levels" of the bacteria in several guest rooms" — a problem it says has been remedied.

All six people who fell ill have since been treated and fully recovered. Aria advises any guests concerned about the outbreak to call (877) 326-2742.