A Park a Day: Elysian Park 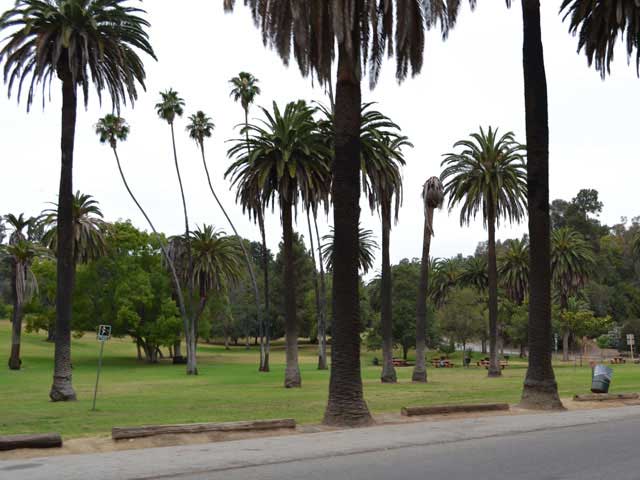 Living just steps away from one end of Elysian Park's Portola Trail, I jumped at the chance to write up this glorious city park for our Park-a-Day project. Thinking about it though, despite walking many of the trails over the years, covering a park of this size is daunting! At 575 acres, Elysian Park is only 2nd in size to Griffith Park in Los Angeles, is home to Dodger Stadium and the Police Academy, and offers a multitude of park-scape pockets to enjoy. Take a walk or a drive through the many roads and trails, find the secluded lawns and city views that suit you!

First a little history: Elysian Park holds the record as LA's oldest public park, originally included in the Pueblo of Los Angeles in 1781, known then as Rock Quarry Hills for the building stone mined in the area. Eventually the pueblo lands were auctioned off or given away, of which Elysian Park is the last remaining large piece. In 1886 the dedicated it as a park, and since then, city charters have protected the land, namely the Citizens Committee to Save Elysian Park, spearheaded by Grace E. Simons (that link is worth following, she led a pretty fascinating life). Ongoing efforts to attribute historical significance to the park are in effect, so we can protect it as a public treasure for future generations. These facts and many others can be found at The Echo Park Historical Society.

Some of the interesting names found in the park include Grace E. Simons, mentioned above, who has a lodge dedicated to her memory off Elysian Park Drive on the West side of Stadium Way. Many parts of the park are named for Cesar E. Chavez, best known for his aggressive yet nonviolent tactics in civil rights activism improving the rights of farm workers. If you've wondered about Montecielo de Leo Politi Park, it's gated but can be rented reasonably for large parties and weddings. Leo Politi was a beloved painter from Bunker Hill whose work often depicted scenes in Los Angeles. Gaspar de Portolà, along with Father Juan Crespi found the area, leading to its incorporation into the Pueblo of Los Angeles. I'm sure there are many others, but these are the ones you'll see most frequently. 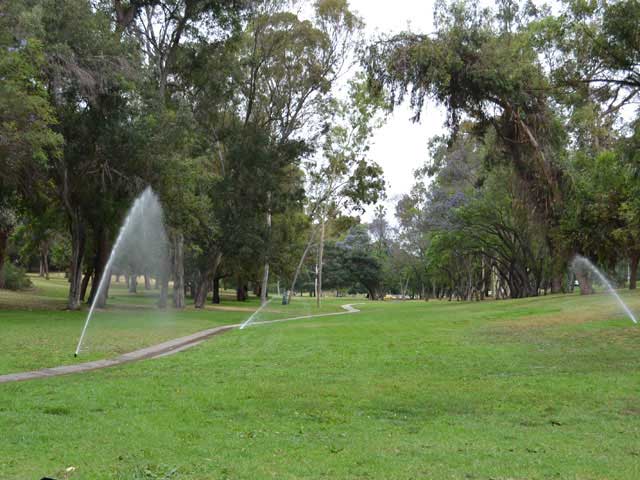 Some favorite parts of the park are found right at the intersection of Stadium Way at Academy road. The park lands inside the palm tree-lined streets are dotted with picnic tables, and often full of families enjoying the sunshine. Some of these families don't mess around when it comes to spending the day in the park, coming with complete tents, hammocks, blankets, park games of all kinds and cooking gear—it's like a mini-vacation right in the city.

North of Academy road, West of Stadium Way, near Grace E. Simons lodge, you'll find the Chavez Ravine Arboretum, planted with various tree species. If you've ever wondered about them, laparks.org has a tree identification key online. This is a great place to lounge in the shade, meet friends for a sloping soccer game, or try out what we call "offroad bocce ball" due to the uneven ground and debris. If you look carefully around the perimeter, where the grass meets the trees are various exercise setups of balance beams, parallel bars and stretching posts.

Just above the arboretum is Palm Hill, true to its name, a high hill covered with palm trees, offering great views to its climbers. Another favorite spot of mine is the plateau next to Angel's Point, a small, less-used park with spectacular views of Dodger Stadium and downtown. 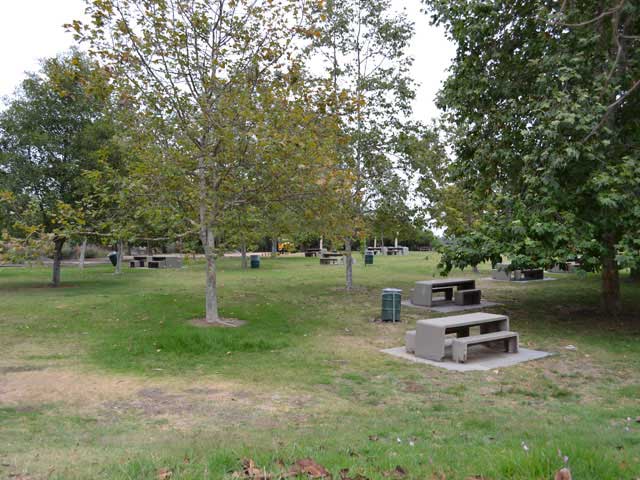 My most oft-traveled path is the Portola Trail, a 5-mile traversing of the park from southeast to northwest that can be easily broken into shorter stretches. hike-la.com has a great write up and map of this trail if you want to try it. The stretch at the very west border is popular with dog-walkers, with a lovely garden and watering spot at the Marian Harlow Gardens, affording views of Glassel Park and Mount Washington to the North.

The mid-section of the trail East of Stadium Way bends through springtime mustard blossoms, and narrows down to a ridge just above the 5 freeway, which is a fun walk in the right shoes if you take care with safe footing. Will you run into teenagers enjoying the view over a secret beer? Will you meet trail-runners out for a jog? I've met both of those, and even once had a stand-off with a sun-bathing snake (the reptile, not some nefarious trail-dweller).

The Portola Trail turns into the park at Park Row Drive, through some lovely trees just above Elysian Reservoir (the subject of some controversy over the safety of the water). Peel off into Solano Canyon Drive for some expansive lawns seldom used by picnickers (accessible off Academy Road by the tennis courts). Or continue on the trail to the East. This part of the trail can get a bit dicey, mostly because you'll be near a road accessible by cars, and then you get to wonder who-all is parking and meeting up here, because there's a lot of that happening. I'll say this, nobody's ever bothered me, so I don't bother them. Just when you stop wondering about this, you'll probably find yourself in the middle of Chavez Ridge Disc Golf Course. I don't play disc golf, so I had to actually walk through the park to find it existed, but if you like the game and you like views of LA and you like Eucalyptus trees, this course is for you! 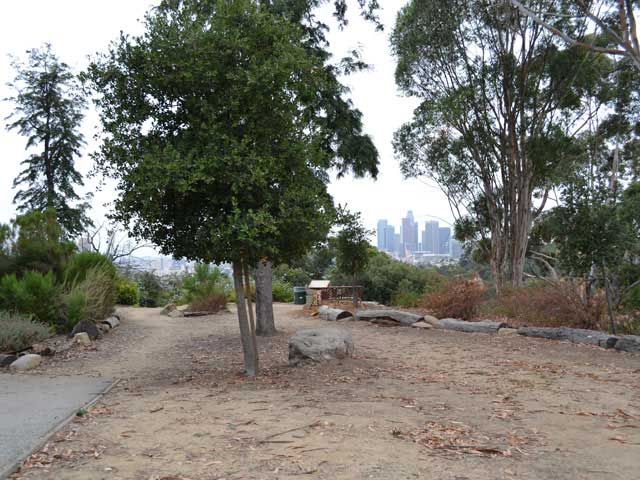 Finishing out the trail on the East side of the park, there is Buena Vista drive, a picnic area and garden atop a hill with views in all directions, leading down to the lawns of Buena Vista meadow. Despite its beauty, this part of the park is more sparsely-attended than others, and has turned into a bit of a trysting spot, which is fine, if maybe adult in nature. What can I say—romance is alive on the East side of Elysian!

For more "pictoral" enjoyment of the park, see Echo Park Now's historic photos of 110 freeway construction, my own recap of springtime exploration of the Portola Trail or a few of my favorites from Elysian Park.

The park's official address is 835 Academy Rd., Los Angeles, CA 90012, but it can be found in Echo Park, South of the 5 freeway, West of the 110 freeway, North of Elysian Park Drive and Sunset Boulevards, and East of too many residential streets to mention.