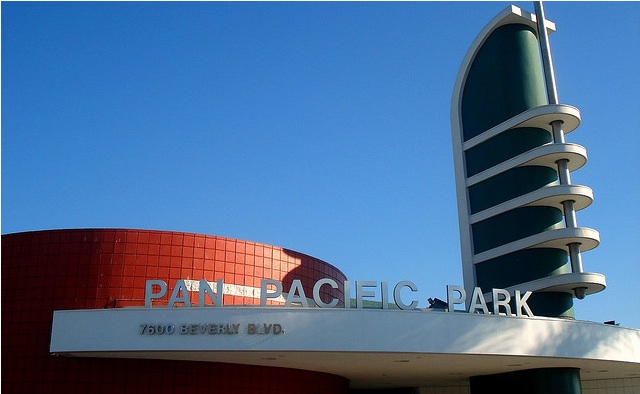 Photo by The Midnight Marauder via the LAist Featured Photos pool
July is National Parks & Recreation Month, and all month long LAist will be featuring a hand-selected park a day to showcase just a few of the wonderful recreation spaces—big or small—in the Los Angeles area.

Feel like hitting the walking trail before enjoying a trendy brunch? Or maybe you want to hop in a pool to cool off after a long day of shopping?

There's a park for that.

Located across the street from The Grove, Pan Pacific Park has something, in both its facilities and its location, for everyone.

The park began its long history as a public facility in 1935, with the opening of the Pan-Pacific Auditorium. The building hosted countless sporting events, concerts and even political speeches. When it burned to the ground in 1989 following contentious debate about its future, the city decided once and for all to turn it into a park for public use.

Throughout the ensuing years, the space has grown and changed, but it stands now as one of the most family- and user-friendly parks in the middle of the city.

Sitting atop 28 acres, Pan Pacific Park is located between Beverly Blvd. and 3rd St. to the north and south, and Stanley/The Grove Drive and Gardner Ave. to the west and east. A winding paved trail meanders through the hilly grounds, spanning nearly the full length of the park for those seeking to trot out the old bicycle, take a leisurely stroll or get Fido some exercise. (The park requires dogs to be on leash, although our spies have borne witness to the flouting of that regulation. LAist does not condone unlawful behavior.)

A newly renovated playground by the northern entrance is called Renée's Place, and caters to the younger crowd with two separate play areas, one designated for two- to five-year-olds and the other for five- to 12-year-olds. (A bouncer at the entrance tells 13-year-olds that they're too old, thus preparing them for the brutal realities of Hollywood*). The kid's area also offers that staple of city summers, a misting fountain.

A recreation center was built near the location of the former Pan Pacific Auditorium, and just behind it sits a public pool, open to families and adults alike. The seasonal swimming hole's hours vary by month, but is mostly open in the afternoons between late June and August. A full schedule can be found here.

Throughout the park, barbecue pits and picnic tables are scattered and free for use by whoever stakes a claim there first.

The park is also home to the Los Angeles Museum of the Holocaust, located at the northwest corner near Beverly Blvd. The museum has been around since 1961, started by a group of Holocaust survivors seeking to preserve their memories and artifacts. It officially opens its doors at Pan Pacific in October of 2010.