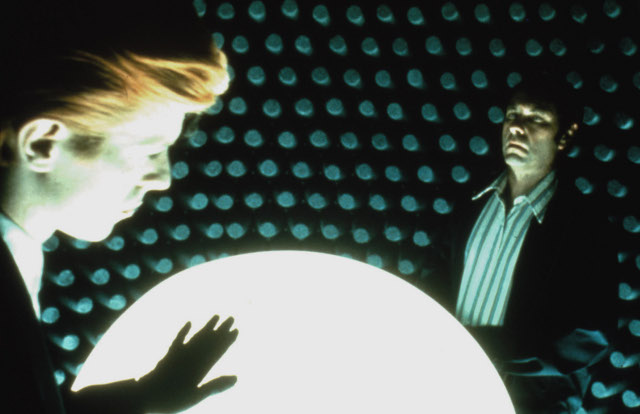 The Man Who Fell To Earth courtesy Rialto Pictures

David Bowie built a musical career on outsider personas like Ziggy Stardust & Aladdin Sane. In The Man Who Fell to Earth, his first starring role, he's literally from another planet. Rialto Pictures celebrates the film's 35th anniversary with a director's cut opening exclusively at the Nuart.

The Man Who Fell to Earth is a haunting meditation on physical encounters & spiritual weakness. Thomas Jerome Newton (David Bowie) seeks to help his homeworld by bringing our water to a dying desert planet. To accomplish this, he acquires patents for his advanced technology so he can obtain industrial resources. Overwhelmed with newfound wealth & influence, he becomes enveloped in his earthly experiences, from carnal pleasures to betrayal. Newton's glassy eyes are cold & disconnected, a poignant reflection of Bowie's real life addiction & alienation.

While it's undoubtedly Bowie's movie, he isn't the only one to credit for The Man Who Fell to Earth. Supporting cast includes character actors Rip Torn (the Men In Black films & a zillion others), Candy Clark (American Graffiti) & Buck Henry (who also wrote The Graduate). Behind the camera, director Nicolas Roeg (Walkabout) imbues desolation with beauty. Call it acid sci-fi. Buck Henry will host tomorrow night's 8:30PM show, while Candy Clark is coming to introduce Monday's 8:30PM show.

Are you a more adventurous film-goer? Then check out our weekly guide to the best of LA's repertory theaters, exclusive screenings & midnight movies. This week we have special coverage of a Robert Mitchum retrospective & exclusive preview events with Errol Morris & George Ratliff.

That's all for this week (& next too - short vacation). See you at the movies!