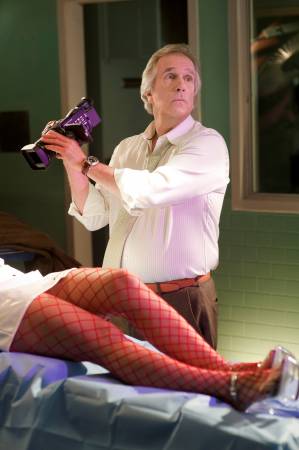 Henry Winkler plays Sy Mittleman on Adult Swim's "Childrens Hospital" which is on tonight at midnight.
Actor, producer, director, and author Henry Winkler will be known for all time playing Arthur Herbert Fonzarelli, aka The Fonz, on "Happy Days" but there's already an entire generation who only know him since his appearance as lawyer Barry Zuckerkorn in the "Arrested Development," and more recently "Royal Pains" and "Childrens Hospital". There's an even younger generation who only know him as an author of the much beloved Hank Zipzer books, which are receiving worldwide recognition for how they are helping children with special education needs and dyslexia.

Although we talked to Henry Winkler back in January, we wanted to talk to him more about his work on the new season of Adult Swim's "Childrens Hospital" which he hadn't filmed yet. Now that the new season is being broadcast every Thursday night (tonight) at midnight we were offered a chance to catch up with Winkler to talk with him a bit more in depth about the show.

Thomas Attila Lewis: I'm really pleased to speak to you about what you're doing on "Childrens Hospital." You bring a lot to it and it's really great how you guys execute what [producers] Rob Corddry, David Wain, and Jonathan Stern bring to you.

Henry Winkler: Well, you know what - here it is, it's very simple: I just listen. They tell me what to do and I don't think twice about it.

TAL: They ask you to do some pretty outrageous things.

Henry Winkler: They do! They do! I sometimes look at the script and I think to myself: Holy mackerel! And I just go about my business.

TAL: Your character, Sy Mittleman, is he a doctor? A doctor of what? Is he a pediatrician? What is that guy?

Henry Winkler: You know what? We don't know. We don't know. But then, of course, remember, a lot of those doctors don't have credentials. You know, and remember that also the hospital is in Brazil and it has nothing to do with children.

TAL: Sure it does! It's owned by Mr. Children!

Henry Winkler: [Laughs] Yes, it is owned by a Mr. Children but it's not a children's hospital which most people mistakenly think it is.

TAL: It seems that Sy operates between misinformed outrage and bewilderment, those are the extremes he vacillates between.

Henry Winkler: I think you're very perceptive. I think that is exactly where he is from. Also, it was just revealed that he actually lives in an abandoned bathroom in the hospital.

TAL: That seems to be the same place where Blake [Rob Corddry] was date raped. Is that the same room? It looked like it.

Henry Winkler: It did, didn't it? That's only because there's very little time so any available door - you never know what's behind the doors.

TAL: So Sy sleeps/lives in the "go-to door" of the hospital?

TAL: Was it Valerie [Malin Åkerman] who tried to bring Sy home to have him live with the rest of the gang?

Henry Winkler: Yes, Valerie was appalled when she saw me come out of the "go-to" room with my coffee. She took me home, but I was banned from there too.

TAL: It seemed like their house was already densely populated.

Henry Winkler: There was a gaggle of human beings already in that apartment.

TAL: How could that have ever been a good thing? Sy would have had more people to interact with [though].

Henry Winkler: He could have [laughs] worked on his people skills.

TAL: You would have had the airplane bathroom problem, too many people for one facility.

Henry Winkler: Absolutely, that is true. Believe me, the image just flooded my mind. I've spent so much time on airplanes lately.

TAL: You were in Boston for an extended period of time, shooting a movie?

Henry Winkler: Yes, I was in Boston, I was in New York, I was just in London on a book tour for my children's books. I also received an honorary honour from the Queen of England.

Henry Winkler: Yes! But I was thrilled to death. She conferred on me the Order of the British Empire (OBE), it was one of four given this year.

TAL: But you were going for the Order of the Garter weren't you?

Henry Winkler: Yes, but I didn't catch it!

TAL: Well, they are elastic and they go far.

Henry Winkler: It shot over my head, because I am short.

TAL: I wanted to tell you I really loved your book I've Never Met An Idiot On The River.

Henry Winkler: Thank you so much. It never dawned on me that I would be able to do it. I did children's books with my partner but I never thought I'd be able to do an adult book.

TAL: It's great because it's not a memoir, you do provide some vignettes of things you have lived through, both in show business and elsewhere. You provide these great themes progressively through the book, I thought it would be a great Father's Day read.

TAL: Can you tell me a highlight of shooting "Childrens" this last season?

Henry Winkler: You know what the highlight is? Being with that ensemble. Each one of them is truly a homerun hitter and they work seamlessly together. It really is a pleasure to be on that set.

TAL: Since these are 11 minute episodes, you are able plough through a season's worth in a pretty short period of time.

Henry Winkler: We do it in about 2 months.

TAL: It's kind of like a TV show fat camp?

TAL: I talked to Megan [Mullally] a few days ago.

Henry Winkler: Now that woman is walking funny - she is a funny human being.

TAL: She talked quite a bit about the joking around on set, that things move quickly on set but it's not a grind.

Henry Winkler: Everybody is on top of their game, you know? And they're all master improvisers - every one of them, so you never know what's going to come, take-to-take.

Henry Winkler: Yeah, this is true.

TAL: It really seems like the show has exploded this year? Not only online but also on TV now.

Henry Winkler: You know, that is the real shame about television in the universe at this moment. It takes a minute to find itself, to find the audience, there are so many things out there to watch, you have to wait until the audience finally catches up with you. But if you're not an instant hit, most of the time you are dropped off the face of the earth. Let me just say, "Happy Days" would not be around if that were true. We were 48 when there were only 3 networks. We were almost let go and then all of a sudden the audience found us and the rest is history.

TAL: With so many of classics, that is the case: "Happy Days," "Seinfeld," "Cheers,"

Henry Winkler: "All in the Family"

TAL: Right! None of these were winners out of the gate for multiple seasons.

TAL: Maybe that's why this time around, with "Childrens," which started out as a web series, that was proof that the show could be done consistently with great writing and performances, it was vetted.

Henry Winkler: Yeah, but we were also at a place with the Cartoon Network, where we were an experiment going to live-action for the first time. They literally gave it a chance, and I imagine they will be doing that with each of their new series that are coming.

TAL: Like "Eagleheart," and Paul Scheer has a series coming ("NTSF:SD:SUV::") later this month.

TAL: In his new series, he's almost unrecognizable! Adult Swim has these amazing ensembles for these shows, I think you guys paved the way for this to happen.

Henry Winkler: That is exciting, isn't it?

TAL: Well, it's great to see you on Adult Swim and also on "Royal Pains" on USA which just started up again last week.

TAL: I was one of them! It's been a pleasure to speak with you and it's a lot of fun to follow what you're doing.

Henry Winkler: Thank you, it's been a real pleasure to speak with you.