A Park a Day: Eaton Sunnyslope and Gwinn Parks, Pasadena 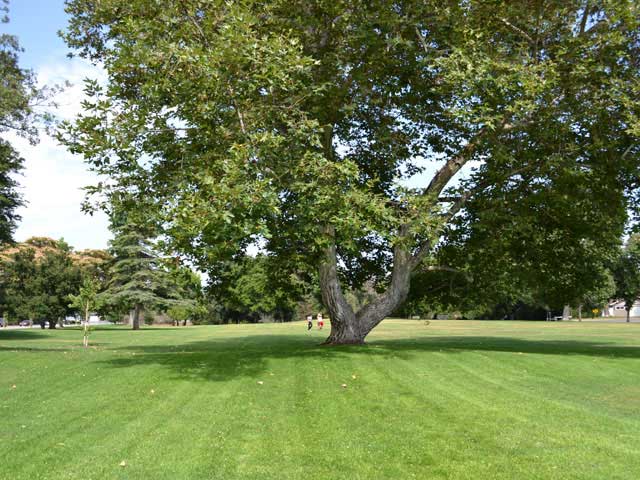 Today I'm dedicating my park profile to two small, little-known suburban parks, Eaton Sunnyslope Park and Gwinn Park in Pasadena. I never would have found these parks, save for the fact that I worked in east Pasadena and went looking one day for a quiet place to eat my homemade lunch. I already loved the fact that my commute brought me so close to the Angeles Crest Forest foothills, but once I found these parks, they became my regular lunch getaway for peace, quiet, and the simplicity of watching birds, butterflies and lizards go about their business.

At one time, the two parks were one, Eaton Sunnyslope, bisected by Orange Grove Boulevard, bordered by Sunnyslope Avenue to the west, and a washout arroyo to the east. The patch south of Orange Grove was dedicated to Pasadena Mayor Floyd O. Gwinn by the Pasadena Beautification Foundation in 1972, with a memorial tree and stone added to the mayor's grove in the name of Ted Huggins, a founding member of the foundation. This division left Eaton Sunnyslope Park with 1.88 acres to the North, and Gwinn Park with 2.7 acres to the South. 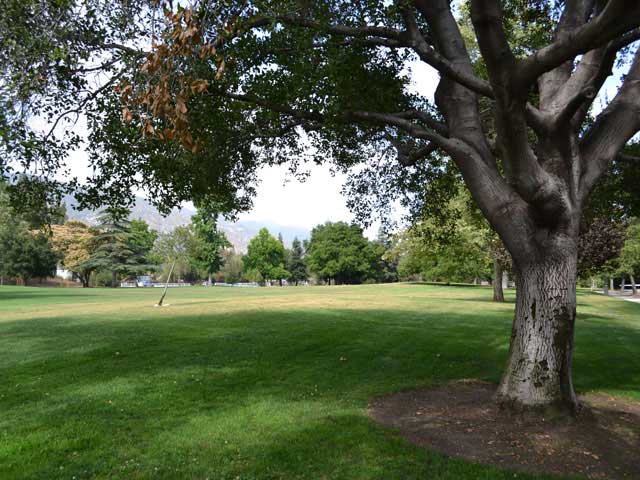 Shade Under the Oak Tree at Gwinn Park (Heather Parlato/LAist)

Being parks nestled into a suburban neighborhood, you'd think they'd be bustling with screaming children, but here's the secret of why i love them: with few exceptions, there's never anyone in either of them. Occasionally someone will traverse the park to cut a corner in their walk, or some kindred spirits like myself will put out a blanket for lunch, or bring some take-out to a bench. I think only once did i see a boys' sports team come to run laps around Gwinn Park. But other than a few other visitors, you get these beauties to yourself, a great place to read or write, stare at the mountains, climb a tree, or just clear your head right in Pasadena.

The two terrains offer different landscapes, which makes them a nice pair to choose from in one location. Gwinn Park is a vast lawn, with a variety of indigenous trees planted along the perimeter, some very tall with dense foliage, perfect for cool shade in the summer months. The center clearing would be a great soccer field if anyone came here (to be fair, maybe they do at times not at all near midday or 6pm, when I'd ride by on my commute home). Instead, it's a perfect quiet place for a read, radio listen, or nap (I'm guilty of all of these on numerous counts). 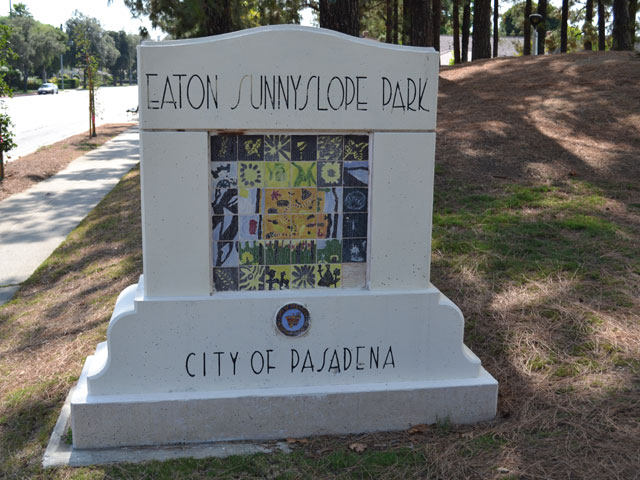 Eaton Sunnyslope Park to the North is my personal favorite. It's small and cozy, due to the land having been shaped into low hills that surround the perimeter of the park, and planted with pine trees, which have the effect of mostly blocking out the surrounding homes, leaving a lovely view of the mountains through the trees. The open green space is encircled by a concrete path, dotted with benches in the shade and some strategically-placed picnic tables, with a childrens' play area on the west side. Again, this space could be nice for a kid-sized softball game, but instead, you might only see the occasional parent with a tricycling toddler navigating the path. And me, if it were 4 years ago, having lunch.

In addition to the luxury of solitude, the pine trees and dry needles that litter the hills give it the scent of summer vacations in the mountains, which adds to the getaway aspect of your visit. The boulders landscaped into the hills are alive with lizards catching bugs and sunning themselves. The arroyo, which usually only has a trickle of water in it, is the perfect attraction for the Western Tiger Swallowtail, which I used to see so often, that I looked them up (they prefer trees near creek beds, which the park and bordering arroyo provide). True to form, there was one fluttering around on my visit, but once I had positioned myself on it's flight path for a photo, it changed its mind about repeatedly circling the park and took off. One new character I saw on this recent visit was a man with something like a pool-cleaning pole, reaching into the trees. When I asked him about it, he said he'd set up a birdhouse for a family of Western Bluebirds that had just fledged. He pointed out the mother to me, who was foraging among the trees. A little research turned up that they prefer open forests to large meadows—yet another species attracted to this very park's landscape. 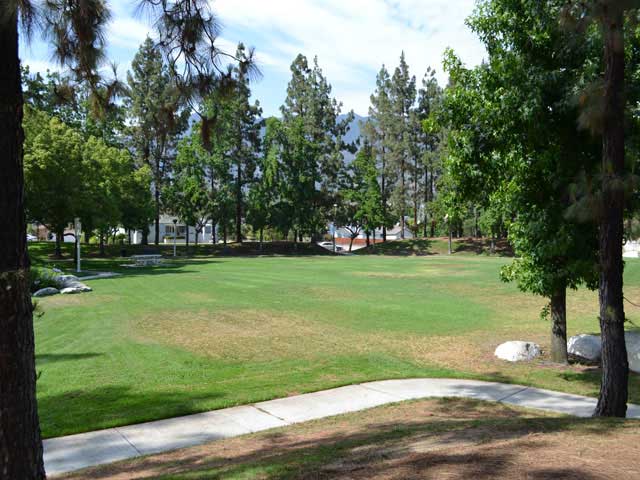 So, the secret is out. If you want to spend time in a park, and selfishly want it all to yourself, Eaton Sunnyslope and Gwinn Parks are waiting for you (more photos here). If you work anywhere in the area of East Pasadena or Arcadia, try out a picnic lunch sometime. Enjoy the birds and butterflies, the smell of grass and pine needles, and pick out points of interest in the mountains—Henninger Flats is right above them. Both parks operate between 6am and 10pm, and request a smoke-free environment.