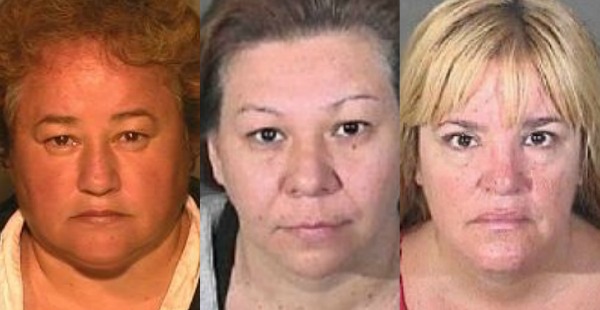 Three former Diamond Bar PTA members were charged on Tuesday with allegedly operating a scheme that defrauded their victims out of millions of dollars.

41-year old Maricela Barajas (a.k.a. Maricela Torres) and 50-year old Juliana Menefee were arrested at their Diamond Bar homes on Tuesday following a six month fraud investigation by detectives from the Commercial Crimes Bureau of the L.A. County Sheriff's Department. A third suspect, 51-year old Eva Perez of Chino, is currently incarcerated in state prison on previous charges and now faces additional charges from this case.

More than 40 investors were victimized in the suspects' ponzi scheme, some losing their life savings. Approximately $4 million was retained by the suspects out of a total $14 million invested, accounting for more than $1.5 million in losses, according to the L.A. County Sheriff's Department. It is speculated that the suspects used the remaining $2.5 million for lavish vacations, expensive hotels, new cars, and splurging at casinos in California and Nevada.

Perez, Barajas and Menefee claimed to have the exclusive right to sell AltaDena Dairy products at Disneyland, Disney Hotels and to small retailers and told investors they needed funds to grow the business and offered lucrative rates of return of up to 100%, according to the report.

All transactions were done in cash and the victims losses ranged from the lowest amount of $5,000.00 to as much as $208,000.00. The victims were given serialized receipts commonly available in stationary stores.

None of the money has been recovered. Suspects Perez, Barajas and Menefee could face up to 20 years each in California State Prison if convicted on the 22 felony charges, including seven counts of Grand Theft and 15 counts of Securities Fraud.