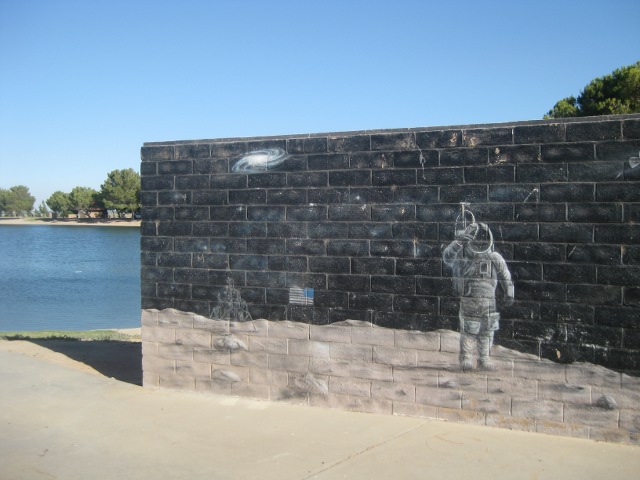 When you think of the High Desert, a lake-side stroll isn't what comes to mind. Lancaster's Apollo Park offers just that. Secreted away in the middle of an airfield, in the middle of the desert, it's a true oasis.

Much of the Antelope Valley boasts a "bigger is better" swagger, and Apollo Park is no exception. The three man-made lakes (named after astronauts Aldrin, Armstrong & Collins) span 26 acres (twice as big as Echo Park Lake!). The lakes are regularly stocked with trout for would be anglers; Apollo even hosts fishing derbies each November. 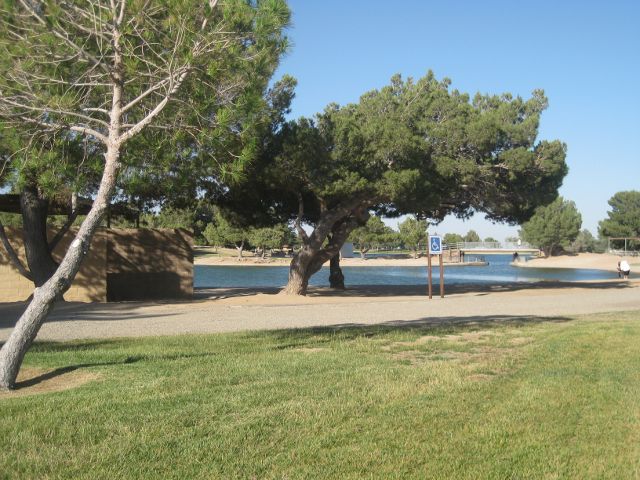 If you prefer to "take only pictures", you can still flock to the park, as the fish & bread-bearing families attract plenty of ducks, geese & herons. It's a serene snapshot, especially considering how many AV neighborhoods are overwhelmed by crows. A warning to those with fancy footwear: the downside of such a sanctuary is tons of goose droppings.

For those on foot, Apollo Park is a Choose Your Own Adventure book. There's the straight shot around the perimeter, or any of the intersecting bridges, windy paths & shaded shortcuts. For those on wheels, you can save your breath for cycling. The main path is wide enough for walkers, bikers, strollers & even those kids on scooters to co-exist without a single "on your left!". For those on four feet, the park is very pet-friendly, with biodegradable doggie-bag stations along the path. 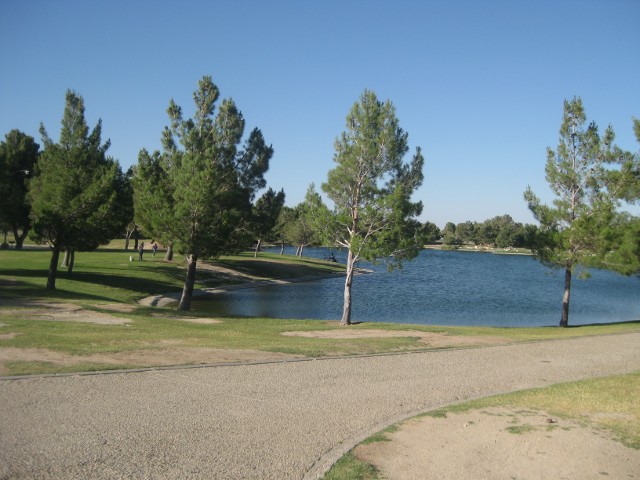 Believe it or not, there's even more! Another 30 acres of park land, all developed & mostly shaded. As a parent, it's great to see several playgrounds for different age groups. They range from the classic swings & plastic slides for wee ones to climbing stations & spinners so intense you'll think you're at space camp. As a partier, it's great to find dozens of picnic & BBQ stations spread throughout. Strategically placed brick walls ensure your BBQ stays alight in the AV's trademark high winds.

In space, no one can hear you scream, and all Apollo's space makes for a relaxing afternoon. The airfield is rarely active on evenings & weekends and all the wind keeps things very cool. For a local tourism double feature, the exit off the 14 also includes the "Singing Road", where your car is the needle and the road is the record. For the sake of public safety & your driving record, we recommend sticking to the speed limit, but as the video below shows, a higher speed achieves higher pitch.