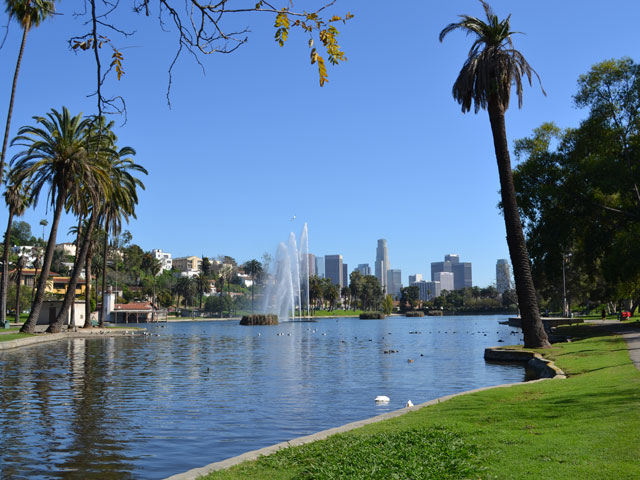 Echo Park Lake with the Downtown Skyline Beyond (Heather Parlato/LAist)

I moved to Echo Park 7 years ago, after a lifetime of driving past it, to and from other parts of Los Angeles not lucky enough to have an historic lake in their neighborhoods. As much as I already loved the idea of it and the immediate call to history the park and lake evoke, I had no idea it would be my favorite little oasis in the city.

Echo Park Lake is a 13-acre urban lake surrounded by 16 acres of recreational open space—but it wasn't built as a public park back in the 1860s when it formed. Back when the area we now know as Echo Park was considered Los Angeles' "West End" (that's right, we're the original west side), the Los Angeles Canal and Reservoir Co. formed Reservoir No. 4 by digging a ditch that peeled off the Los Angeles River, eventually filling Echo Park Lake at the North West corner (where the lotuses used to be). Additionally, a dam with an outlet around today's Bellvue Avenue drained water down the Woolen Mill Ditch to a mill at present-day 5th and Figueroa, so Echo Park Lake was very much an important conduit in the history of LA's civic water systems. All of this predates even the development of Sunset Boulevard as a major thoroughfare—Echo Park is really the lake that made our part of town truly viable (check out echoparknow.com's zoom in on this interactive map from 1909). Read more of the fascinating history of Echo Park Lake at The Echo Park Historical Society's Web site.

The visitors to Echo Park Lake seem to change over the course of any given day. When I first moved here, I had a stressful job in Hollywood, and took to leaving for work a bit early, pulling over right before entering the 101 and taking a quick walk around the lake. Aside from being a great way to start the day, you might be surprised at how many people are fishing at the lake around 8am, complete with chairs, umbrellas, coolers and fishing equipment (I'd say at least 10 is typical, usually 4 times what you might see later in the day). You've also got the serious joggers and walkers in the early hours, getting their dose of nature and exercise before the workday begins.

As I transitioned to working on my own, walking or running around Echo Park Lake became a welcome break in my day in the afternoons, with a different set of compatriots to go with it. Afternoons in Echo Park still have the serious walkers and runners circling the lake, with the welcome addition of people walking happy dogs or pushing strollers, friends chatting on benches and blankets, teenagers hanging out after school, families chaperoning their children on training-wheeled bikes, and open green space dotted with napping sunbathers and soccer players enjoying an impromptu game. At various points along the shores, kids are seen feeding ducks, geese and pigeons, or boxer turtles can be spotted floating in the sun with their noses peeking through the surface of the water, to the tune of cart vendors ringing bells to announce the sale of ice creams and duros. If you're visiting in springtime, you'll spot families of ducks and ducklings, or geese with a gaggle of little fluffy goslings pecking for bugs in the grass, converging on the island at the northeast end of the park. 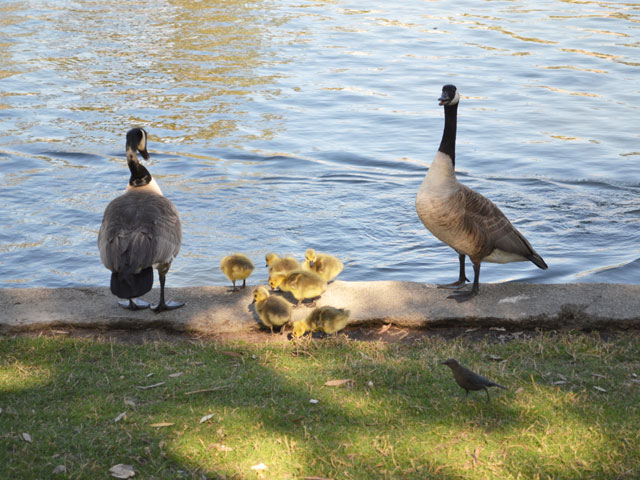 I've definitely had experiences in Echo Park that I've never had in any other Los Angeles parks. Though the police do their best to crack down on it, Echo Park has often become a wild display of celebratory and somewhat-lawless fireworks on Fourth of July. In 2009, 826LA hosted The Echo Park Lake Paddle Boat Regatta where teams dressed in costume and raced themed paddle boats around the lake. I watched the frivol and folly on the east bank with countless others, entertaining a little girl who kept frequenting our blanket from her family's nearby station. You get to truly see the community and meet your neighbors in Echo Park.

The public works of the 1930s brought us the Lady of the Lake statue, whose oft-broken hands were repaired last year (I was able to get a picture of this brief miracle). Though they are broken once again, the public works are back, thanks to funding from Proposition O, which includes a beautification project for Echo Park Lake scheduled to start after the Lotus Festival in July of this year. I'm not thrilled about the lake being closed for 2 years, or for the hard times that will fall on the animals that live there, but if pollution and bad drainage finally killed our historic lotuses, it's time for a much-needed upgrade. The Echo Park Rehabilitation site has a project gallery with before and after examples, worth a look at what's to come for Echo Park Lake. The main efforts will be to drain the lake, replace the lake liner, rehabilitate the lotus beds, and create far more wetlands that will help keep the lake clean while providing a refuge for wildlife. The path around the lake, currently asphalt and dirt, will be replaced with a pervious material to filter groundwater through decomposed granite to the soil below. The lights in the park will be converted to a solar-powered system, and the Lady of the Lake will return to her original spot at the north promontory. What I don't see directly addressed is the boathouse, and what will become of the paddle boats. I hope they are restored, I only got to ride them once! 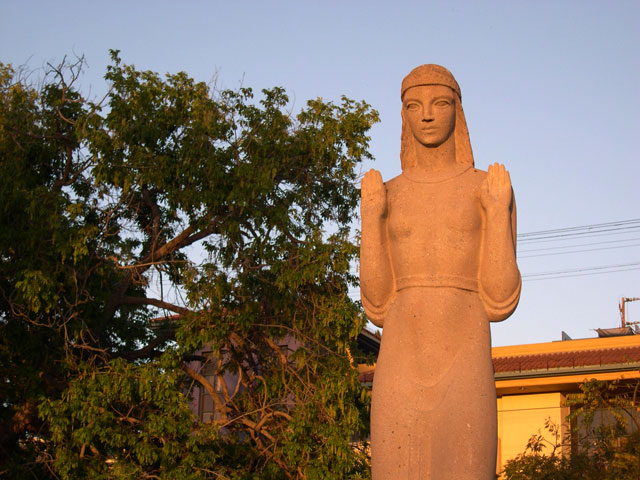 The Lady of the Lake, Spring 2010 (Heather Parlato/LAist)

Echo Park Lake is located at 1632 Bellvue Avenue, 90026, between Echo Park Avenue and Glendale Boulevard, bordered by Park Avenue to the North. The 33rd Lotus Festival will take place in Echo Park, July 9 & 10, 2011. The next Echo Park Lake rehab project town hall meeting is July 20, for those interested. I've posted a selection of my favorite Echo Park photos here as well.