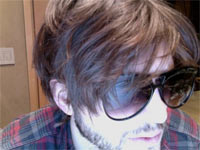 In an article titled "Real Men Get Their Facts Straight," the Voice describes Kutcher as a "scruffy doofus" in one of the campaign's PSAs.

The message is somewhat bewildering, given the lack of context, but there are more like it, all part of a campaign featuring celebrities Justin Timberlake, Sean Penn, and Jason Mraz doing cartoonishly manly things, such as trying to shave with a chainsaw and find a car while blindfolded in a parking lot.

The Village Voice, which made the questionable statistics surrounding teenage sex trafficking victims a cover story this week, maybe somewhat conflicted in its coverage, Kutcher argued. The Voice owns the adult services classified ad site Backpage.com, for which the Voice was sued last year by a former teen prostitute.

It's estimated that 100,000-300,000 teens are victims of sex trafficking. But according to Charlie Foster at Turnstyle News:

The Village Voice would have you believe that 88, the city’s recent average for underage prostitution arrests, is the only scientifically derived number available. And in this fashion, the Voice surveyed the arrest records of 37 cities across the US to calculate its own national number. Calling it “Actual Underage Arrests Yearly Across America,” it totals a mere 827.

This is an issue that isn't going away and it seems that Kutcher is dead serious about taking up the cause of defending victims. But the Village Voice isn't doing much to stem a problem that exists mostly underground by merely pointing out that the only statistics repeatedly parroted by the media (and sourced to an FBI bulletin) are vague and unfounded.

Does anyone win such an argument?