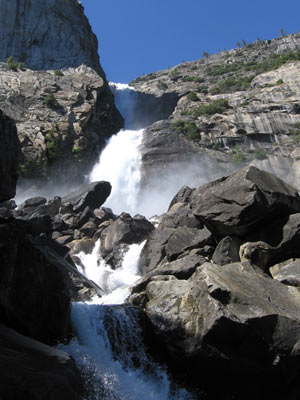 Photo via Wikipedia.
Two Whittier hospital employees were killed this week when high waters swept them over a bridge and into a reservoir at Yosemite National Park.

Gregory Meyer and Richard Fox were on a four-day backpacking trip with three others when unseasonably high waters swept them into Falls Creek near Hetch Hetchy Reservoir. The group had successfully traversed the Wapama Falls bridge on the inbound hike but runoff from a storm that hit the mountains Tuesday led to the swollen waterfall which swept the men to their deaths early Wednesday.

Meyer and Fox were hiking at the head of the group, the three others were uninjured. Park spokesperson Keri Cobb said the men were 5 miles from the trailhead and could have taken an alternate route that would have significantly lengthened the return trip, according to the SF Chronicle.

Both men were doctors at the Presbyterian Intercommunity Hospital emergency room in Whittier, according to ABC7. Meyer, 54, was an ER physician and had proposed to his wife years earlier near the location of the accident, according to NBCLA. Fox worked as a physician's assistant.