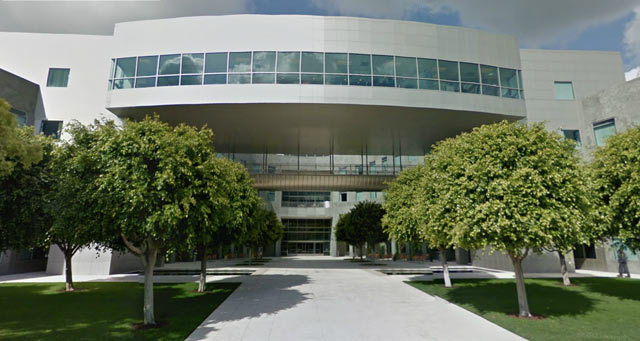 Myspace headquarters on Maple in Beverly Hills (via Google streetview).

Specific Media will acquire the fledgling social network turned social entertainment site for $35 million according to All Things D.

"Today, we are announcing that Myspace will be acquired by Specific Media, one of the world’s leading online media and advertising platforms," Jones wrote in the email addressed to Myspacers. "Over the next few days you will be hearing from the team at Specific, including their CEO, Tim Vanderhook, regarding their exciting plans for Myspace and how it fits in with the overall vision of their company."

Jones indicated in the email that a significant reduction in staff was imminent, adding that he would be stepping down as CEO of Myspace after assisting with the transition to Specific Media over the next two months.

Companies across Southern California have already begun reaching out with job offers to Myspace engineers and developers about to enter the local tech talent pool.

$35 million seems like quite a bargain for Myspace, which was founded in 2003 and acquired two years later by Fox Interactive Media (part of Rupert Murdoch's News Corp.) for $580 million. If nothing else, Specific media comes away with 8 years of data encompassing the demographics and behavior of millions of users.

Since 2009 Myspace has laid off approximately 1,500 employees. The dilution of the remaining 400 employees, most based at Myspace's Beverly Hills HQ, was to begin Wednesday, according to rumors earlier this week, with the announcement of a sale of the company as soon as Friday.

ScoreBig is one of many local companies angling for ex-Myspacers entering the talent pool.

Myspace was the primary social network of choice for more than 100 million users and became a successful vehicle for the promotion and discovery of music artists. But in 2007 Facebook opened up to users outside of universities and soon eclipsed Myspace in popularity. By 2008 Myspace's user base had stagnated while Facebook is now approaching 700 million users worldwide.

Irvine-based Specific Media is one of the largest entities on the internet and specializes in online advertising. According to the WSJ, the Myspace acquisition helps transition Specific "into a media company with its own ad space to sell instead of simply an online ad technology firm that brokers ad space on behalf of other websites."

From the press release announcing the acquisition:

“Myspace is a recognized leader that has pioneered the social media space. The company has transformed the ways in which audiences discover, consume and engage with content online,” said Tim Vanderhook, Specific Media CEO. “There are many synergies between our companies as we are both focused on enhancing digital media experiences by fueling connections with relevance and interest. We look forward to combining our platforms to drive the next generation of digital innovation.”

Both Activision CEO Bobby Kotick and Chris DeWolfe and Tom Anderson, two Myspace cofounders, were rumored to be interested in acquiring the company in recent days.